You know that assignment? That read-a-book-set-in-another-country/multicultural fiction assignment?

If you really want the feel of life in another country, you need to read a fiction book written by an author from that country. The translation may not always be perfect, but the feeling of that country comes through in a way that can’t be matched. The emphasis isn’t on teaching the reader about the culture, but in telling a story about teens who just happen to be members of that culture. And it’s fascinating. 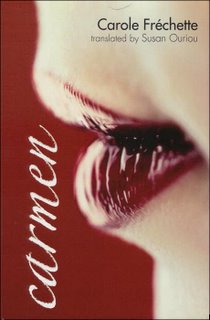 Carmen written by Carole Frechette and set in French Canada, is the most recent translated book I read. If you’ve ever felt a fear of public speaking you will be able to commiserate with Carmen, our main character. Not only does she have an oral report to give in class, but she’s also got to face the boy she has a huge crush on---and whom she stupidly confessed her crush to in a note she now wishes she’d never given him. In utter fear, Carmen runs away from home, or from school, really. She winds up halfway across the city, breaks her lifelong good girl image by shoplifting, gets her face plastered all over the evening news, unwittingly becomes the symbol of the Lost Generation, and in a total fluke, bumps into the lead singer of her favorite band who then lets her tag along on a whirlwind weekend that causes Carmen to figure out who she is and what she wants. . . though it’s not exactly what she thought it would be. This is a brief but very satisfying read. Though it sounds like the makings of a fluffy romance, it’s definitely something different. This is the story of the “invisible” girl who suddenly becomes visible. And check out the intriguing cover. Should someone tell her to blot that lipstick?


Next, God and I Broke Up by Katarina Mazetti, translated by Maria Lundin. Set in Sweden, this book is a heartbreaker. It’s not a romance, but it breaks your heart nonetheless. This is the 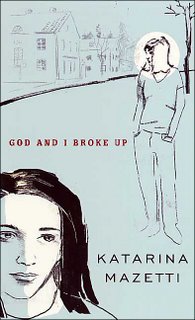 story of a friendship that lasts for exactly 120 days. That’s how quickly Linnea becomes friends with Pia---and how quickly she loses her. What do you do when your best friend dies? You certainly don’t stop loving the person. What happens to the one left behind? What do you do with the bitterness, the guilt and the loss, especially when you know that the death didn’t have to happen? God and I Broke Up is the often humorous, often bitterly sad story of a girl’s most important and dear friendship, and the aftermath of its end. (Totally random librarian’s note: I really like the title.)

Interested in Japan? Try The Friends by Kazumi Yumoto. Honestly, the cover of this book does nothing for me. It will probably do nothing for you either. It’s not the kind of cover that encourages a lot of readers to scoop it up off the shelf, saying, “Oooh, this looks really great!” But the story is good. This is a rumination on death, friendship, and life. It will appeal mostly to younger teen readers as its main characters are three twelve-year-old boys. These three friends become obsessed with death after an unexpected funeral. The boys want to know the truth about death, so they begin to spy on an old man who lives in their neighborhood, convinced that the old man will surely die soon, and hoping to witness the event for better understanding. The old man does not oblige them by dying quickly, and they’re soon caught in their spying. As the book progresses, the boys form a relationship with the old man, and it's often a very funny relationship. This is a quiet read, not full of twists, turns, and suspense, but satisfying in a quiet kind of way. And it gives you a good sense of what Japanese school boys are like socially and what the education system is like, as well as what it’s like to become an adolescent in modern day Japan.

All three of these books offer an inside view of a different culture. Carmen gets the award for best cover, God and I Broke Up gets kudos for a fabulous title, and The Friends gets credit for taking something that could have been totally creepy (waiting for someone to drop dead) and making it understandable.
Posted by Karen Labels: Karen, Real life fiction