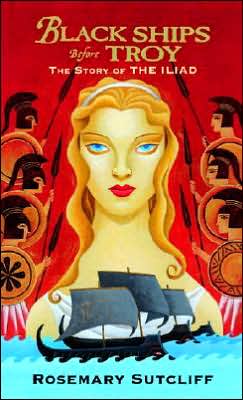 This is very shameful for an English major to admit, but I have never read The Iliad. I keep meaning to read it--I even own a very nice copy--but all these years later, it remains unread. When I saw the movie Troy, I thought I'd give The Iliad a go. Instead I read two teen books about the subject, and now I feel I've had my fill on that ten-year war for awhile. So, though I still can't say I've read The Iliad, I can heartily recommend Black Ships Before Troy by Rosemary Sutcliff and Inside the Walls of Troy by Clemence McLaren.

Shamefully, I could not stop comparing Black Ships Before Troy to the movie, Troy. I kept thinking, hey, that's not the way it was in the movie! Well, of course not. But it was interesting to compare and contrast the book to the movie. Was it wrong that I kept picturing Achilles as Brad Pitt? Not to me it wasn't! The book is satisfyingly bloody, as any war story is bound to be, though not gratuitous. Despite the chick on the cover (is that face really capable of launching a thousand ships? She looks a little thick-necked to me. . .) this is a book about WAR. And it's about men's jealousy. And women's jealousy for that matter. And about the gods getting into petty arguments and one-upping one another. And about cunning. And about heartache. And about glory desired, glory lost, and glory attained. And mostly about the great price paid for all of this. This is the perfect shorter version of The Iliad, written in accesible language and really packing a punch. (Added element of cool: at the back of the book there's a guide to pronouncing the Greek names. Ilike knowing how say "Hephaestus" or "Penthesilea" properly.)

For a different take on the same story, go with Inside the Walls of Tro 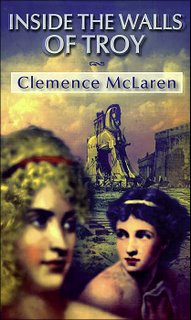 y. This book is from the point of view of two major female characters of the Troajn War---Helen and Cassandra. Women were often relegated to the background in the old tales, but this novel is all about the chicks. How would it have felt to watch your society go down the tubes, to watch the ones you love go to war, to warn them of misfortune but not to be believed? This was Cassandra's curse--to know the future but not to be believed. On the other hand, how would it have felt to know that because of you--because you fell in love with someone you weren't supposed to---thousands of warriors would die? That was Helen's curse. Speaking of Helen, it's pretty interesting to compare the way she's portrayed in these two books. In Black Ships she's a bit of a nitwit and you just want to shake her for causing so much bloodshed and heartache. In Inside the Walls of Troy Helen's a whole heckuva lot more sympathetic. You can see how it all happened. Here you get a lonely Helen, a Helen whose outrageous beauty is also a kind of curse, a Helen trapped between a loveless vow and a man she truly desires. What would you do if you were Helen? Would you keep living life without enjoying it, or would you go with the man you love, knowing it would cause death and destruction as a result? (Snippy side note---look how doggy Helen looks on the cover of the McLaren book! Why can't the cover artists get it right?! She was the most beautiful woman in the world! The 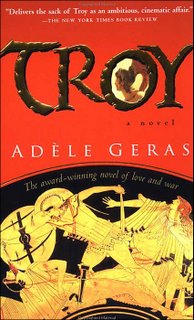 most beautiful woman in the world does not have bad hair days. Ever.)

I encourage you to go forth and read about Troy. Maybe you'll even read The Iliad. (Man, I need to read that book!I need to read that book just so I can say I've read that book. ) And if you're still hungry for teen books about Troy, don't forget Troy by Adele Geras. I like the looks of its cover---they didn't even try (and thus fail) to portray Helen---but like I said, I've had enough of this war for awhile, and I'm going to move on to something else. Anyone read the Geras book? Any thoughts?
Posted by Karen Labels: historical fiction, Karen

I've read a classic that Karen hasn't read? It's shocking, I tell you, shocking!