Anorexia seems to be one of those teen plotlines that will not go away. As long as there are supermodels to aspire to become and other totally unrealistic expectations to drive a girl toward nervous breakdown-land, anorexia, bulimia and other eating disorders will continue to haunt the shelves of teen fiction. When an author is dealing with a been-there/done-that plotline such as Teen Girl Faces an Eating Disorder, that author better do something really new and fresh to catch a teen librarian's (or other reader's) interest. 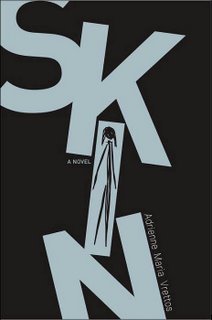 Adrienne Maria Vrettos did just that in her debut novel, Skin. It's hard to believe this is a first novel. The narrators voice is flawless, the plot gripping, and the family dynamic utterly believable in its dysfunction. The reader knows from the first few pages of the book that the main character's sister has died of anorexia. Fourteen-year-old Donnie finds his sister collapsed on the floor and makes a desperate but unsuccessful attempt to revive her. The remainder of the novel consists of Donnie remembering the events leading up to the death and then a telling of his own actions afterwards. I think it's giving Donnie the narrative voice that makes this novel work so well. Usually the anorexic's tale comes from the anorexic's point of view. This story is Donnie's, and it's about how his sister's sickness affects him as well as the rest of his family. Already an outcast at school, Donnie decides to become a kind of outcast at home, feeling that "disappearing" might somehow help his sister cope. Naturally to say it only hurts Donnie. In the meantime he falls in love with his sister's best friend, tries to deal with estrangement from his only remaining "friends," who begin to mistreat him at school, and come to terms himself when his parents' constant fighting results in a separation. The family dynamic in this book is so well-done, so believable. No one is an outright villain, no one a pure angel. Each character emerges as a real person, complete with real faults. I read Skin in a few hours. A short book, a good read, a fresh take on an old story.

For another unusual take on the anorexic tale, try Mercy, Unbound by Kim Antieau. This one sounded like a great read--- teenager Mercy stops eating because she's convinced she is turning into an angel. That's right, an angel. Mercy can feel an itchiness in her shoulder blades 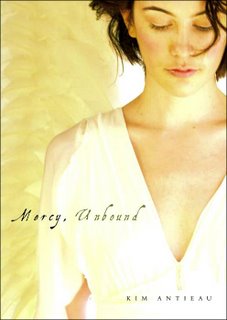 , which tells her that her wings are beginning to form. And since angels aren't human, they don't need to eat. Well, Mercy's parents aren't on board with the whole hey-guys-I'm-turning-into-an-angel business so they send her to an eating disorder clinic in New Mexico. There Mercy meets other eating disordered teens, forms new friendships, and begins to suffer a crisis of faith. Could it be that she's not really an angel but just a troubled teenage girl? Hmm. I wish I could give a glowing recommendation for this book but unlike Skin, which I loved, something about this book didn't gel for me. However, I adhere to the ol' someone's trash is someone else's treasure philosophy, so this might go over huge for. . . well, for someone who just isn't me. My beefs with the book were these: the conversations between characters sounded totally unreal; the premise was weak; the greatly italicized portions of the text drove me batty; the sudden switch into third person after a traumatic event didn't strike me as breaking literary new ground but as an eye-rolling cheap effect; and the girl's relationship with her parents was utterly unreal---as in, most understanding and cool, intelligent parents ever. Um, sure. We all had those parents, didn't we? Well, I won't spoil the ending but the ending didn't work for me either. Maybe I just don't dig New Mexico enough to dig the ending.

Kim Antieau said...
This comment has been removed by a blog administrator.
7:49 PM

Sorry you didn't like the book, Karen. And from a fellow librarian. *sigh* (Interesting enough I got a letter from one young person who had stopped eating for a time because she thought she was becoming an angel--and she was shocked when she read my book.) I won't quibble with anything you said because you either liked it or you didn't. A writer can't please everyone. I wish Skin had not come out at the same time. People keep comparing the two. My book is not an "anorexic" book, but it is more about how one girl's ability to respond to a world she views as out of control. Anorexia is only a catalyst in my novel.

Thanks for the review. I used to write horror, by the way. (I read you liked horror.) Most of it got published, but I don't write it much any more. I didn't like the way it made me feel. I agree with Muriel Rukeyser who said, "The world is made up of stories, not atoms." And nowadays I think we need stories with hope and beauty. But then, I could change my mind tomorrow.

I didn't like the way it made me feel. '

That's interesting. Lois Duncan, one of my favorites from my own teen years, went through a similar change in writing style. She wrote (somewhere, I've forgotten where) that she lost her heart for the suspense/horror stuff after the murder of her daughter. One can certainly understand that. A writer should write what she feels compelled to write and what she wants to write, or it's no good.

I've actually given Mercy, Unbound to at least one teen because I knew she'd like it. That's so important as a librarian---not imposing your own tastes on the patrons. She really liked the cover (me too!) and the premise. I haven't seen her yet to talk about the book though.

I'm afraid the anorexia-fiction comparisons are inevitable. I did notice that you avoided giving Mercy an official diagnosis, but I must admit I just assumed she was anorexic, albeit unusually so. And I think I was half-hoping she really would sprout some wings and turn out to be a supernatural creature:) That's the horror-lover in me talking. I think she did sprout wings, just metaphorically.