Reading Outside the Box 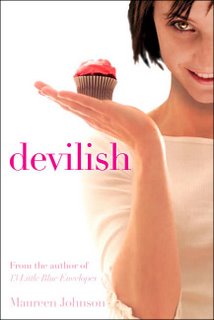 I started Devilish by Maureen Johnson yesterday afternoon and today I find myself on page 159 and raring for more. Hmm, this book doesn't seem my usual fare though it does have a nice supernatural twist, a wry, intelligent narrator, and a good dose of humor. I mistakenly thought it was chick lit when I picked it off the new book cart at the library, and I thought to myself, I should really try some chick lit so I know what to recommend to the chick lit readers of the world. But I don't think this truly falls into that category.

In a nutshell, Devilish is the tale of Jane Jarvis, short, punk-haired, superintelligent, who must save her best friend, the less intelligent, less sure-of-herself, Ally, from losing her soul in a Faustian deal with a demon: damnation in return for beauty and sleek popularity. This isn't a super original idea but Johnson handles it in an orignal way, and the ride is so much fun it doesn't matter if you've been on this style rollercoaster before. The demons are almost as much fun as the narrator, despite that they're, well, evil. And Johnson has written a ditzy younger sister character who plays the perfect amusing foil to the intelligent Jane. The book really takes off when Jane, trying to save Ally (despite a betrayal most friends would have trouble forgiving) endangers her own mortal soul in part because her logical mind rejects the idea of demons even when they're right in front of her.

I can't wait to see how this ends.

Incidentally, I wouldn't label this book horror since it's not truly horrifying, despite the dealing with demons. I love the humor and wasn't expecting it to be as funny as it is. So, it's not chicklit and it's not horror. It's just a good fun book. The lesson being: sometimes it's good to read outside the box. For some reason I veered away from reading Johnson's 13 Little Blue Envelopes but now I might give it a go since I am enjoying Devilish so much. And check out the cover. That is a good cover.
Posted by Karen Labels: humor, Karen, supernatural