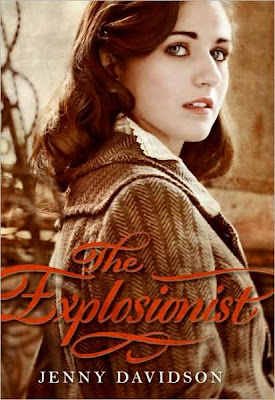 In The Explosionist Jenny Davidson presents an altered world, one in which Napolean won at Waterloo. By the year 1938 when the book takes place, much has changed. Famous writers in our world are scientists in Sophie's. Sigmund Freud has a radio talk show. Alexander "Tolstoy" Bell is mentioned, and Spiritualism is still in full swing because everyone knows that communication with the dead is not only possible but scientifically proven.
Our narrator, Sophie, lives in Scotland, now a major munitions producing nation, part of the New Hanseatic League and most importantly, free from English rule. But all is not well. Terrorists from the Brotherhood of the Northern Alliance have been setting off bombs, and one explodes at Sophie's elite private school for girls, shattering all the windows in her science classroom. Shortly afterward, Sophie attends a seance at her great-aunt (and guardian's) home and realizes she has an affinity for contacting departed spirits. Sophie uses both her newfound ability and her love for science to investigate when a few days later the medium from the seance is murdered, her throat slashed in a nearby hotel. Soon Sophie and her best friend, Mikael, are being followed by dodgy characters, and then Sophie uncovers a secret of chilling proportions, one that might destroy her fellow classmates and Sophies herself. (I can't go into this part very much or I will spoil important plot points. Suffice it to say, it was ghoulish, so I loved it.) On top of it all, Scotland is on the verge of war, meaning the world might change all over again.
Readers will enjoy this book whether or not they catch all of the historical (historically altered, that is) references. These 453 pages fly by. It's hard to label The Explosionist with one genre label since it is all at once supernatural, mystery, sci-fi, adventure, romance. . . and sorta-kinda historical fiction of the "what if this happened instead of that happened" variety. This will also appeal to varying age levels since the language is easy to understand (for the most part; some readers might be thrown by the British slang) and there is no sex or foul language to upset parents or teachers.
I smell a sequel on the horizon. I'll look forward to it because I really liked Sophie and although the conclusion of the book was satisfying, there were some big plot lines left wide open for further elaboration.
Posted by Karen Labels: adventure, alternative history, Karen, mystery