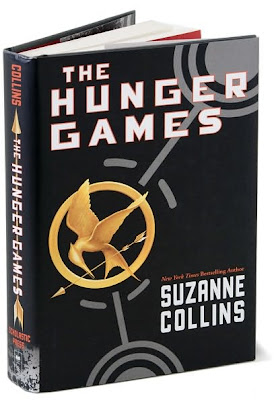 The Hunger Games by Suzanne Collins is without question the most exciting book I have read this year. Set in a dismal future, North America has become Panem, divided into twelve sectors. (There used to be thirteen, but Sector Thirteen tried to rebel and was obliterated--one presumes, nuked--for their efforts.) Once a year the Capitol hosts the Hunger Games, a televisied fight to the death between twenty-four teenagers selected in a random lottery. One boy and one girl from each sector are selected, treated to a few days of opulent living and makeovers by a staff of stylists, then dropped into "the arena," a simulated environment that changes each year. The kids fight until only one remains alive.

Welcome to the modern Roman games.

The games are, of course, unfair. While the rich kids from the better sectors have trained their whole lives for this kind of warfare, other kids from the poorer sectors are generally woefully unprepared to survive. And the poorer a kid is, the more times his or her name is entered into the lottery. This is because a person can opt to enter the lottery multiple times in exchange for much-needed food. When Katniss, our narrator, hears her younger sister's name called during the lottery, Katniss rushes forward to take her sister's place. In a matter of days Katniss's world turns upside down and her future looks distinctly grim. Adding to the confusion is the hapless boy who is chosen along with Katniss, a boy who is one of the wealthier of their sector and who professes to have a mad crush on Katniss. Is this true, or is he merely trying to manipulate the games? How close can Katniss afford to get to him anyway when only one person can survive? And does she have even a slim chance of making it out alive?

From the first page I was hooked. This book is fast-paced and charges the adrenaline. The world the author created is believable and fascinating, especially the politics involved in the game. This is definitely a plot-driven novel, but the characters are no slouches either. Some reviewers have cried foul, claiming that The Hunger Games is a rip-off of the Japanese novel, Battle Royale. Having read Battle Royale, I was curious to see if this was so. I found it completely different from the Japanese book. Sure, the basic idea is the same--pit a bunch of teenagers against one another and see which one makes it out alive--but that plot isn't original to Battle Royale either. There have been several books and movies using the same idea of a brutal fight to the death; what makes these two similar is that the participants are teens. Still, I found The Hunger Games to be so unique in terms of the world that Collins created that accusations of plot plagiarism are unfair. Some literary critics claim that there are only two basic plots in the world: 1) A stranger comes to town, 2) A man/woman goes on a journey. Or, to put it another way, "There is nothing new under the sun." Even if five people were all given the same basic plot idea and then wrote five novels based on that plot, I think you would find that each novel was quite different from the others. This is what I felt reading The Hunger Games.

The hype about this book is well deserved. My only gripe--and this is the grammar freak in me rearing her ugly head--is that the editor missed some glaring grammatical errors, things such as using "lay/lie" incorrectly, and even more painfully, allowing the author to write things like, "He gave the weapons to him and I." Him and me, darn it! But these are small--if rankling--complaints. I flew through this book and can't wait for the sequel to come out.
Posted by Karen Labels: adventure, Karen, science fiction

there are horrible grammatical errors...
someone wanting to "revenge" the death of, instead of "avenge"
someone being "on" death's door, instead of "at" death's door,
not to mention the ones you listed... there are others as well...
"the dumbing down of America..."
where are the editors?
they should be ashamed...
it is a very good read but i am saddened by these lapses... i've found it recently in another YA book that was very good, but i think it is indefensible and depressing...

It's a good story and compellingly told, but the glaringly poor grammar had my teeth on edge the whole way through! I agree that the editors blew it!

I can't believe some can't simply enjoy a book. Seriously? Then I certainly wouldn't recommend anything by Hemingway! Or James Joyce! Or....and the list goes on. Get over yourself!

Totally agree. The editors were asleep at the wheel.

There's a difference between making a few grammatical errors and allowing them to take over the novel. I've never seen so many fragmented sentences in my life. I love to read and have had to reread paragraphs multiple times in order to grasp the full concept. This has been my only problem with the novel. I will offer that they may have been deliberate mistakes because of the POV in which the book was written. If you think about it, we all have moments where we think in fragments because we aren't worrying about being proper. By reading the book, we are being thrown into Katniss' mind. Aside from the errors, I absolutely love the plot. The characters are compelling and believable. She kept me on the edge of my seat throughout the trilogy. All things considered, I still praise the author for the originality and content of the novel regardless of whether the errors were intentional or not.

The Hunger Games is also rank with sentences that are dependent clauses, brief phrases and clauses that should actually be items in a series, sentences that are missing subjects, verbs, and conjunctions. In addition, Collins's narrator sometimes speaks in the second person rather than the first person point of view. For instance, take this mess that appears on page 36 of the paperback edition: "The competition will be far beyond my abilities. Kids from wealthier districts, where winning is a huge honor, who've been trained their whole lives for this. Boys who are two or three times my size. Girls who know twenty different ways to kill you with a knife." The only sentence quoted above that is an independent clause is the first sentence. Every other sentence is a fragment. I am not even sure how young adults can figure out what Katniss is trying to say in the above sentences. The Hunger Games, unfortunately, is filled with these kinds of errors.

Come on people! It is a great book, and the so-called "errors" really add to the character of the book. Being presented in the point of view of a poorly educated teenager, you should be grateful Suzanne does not misuse their, they're, and there!