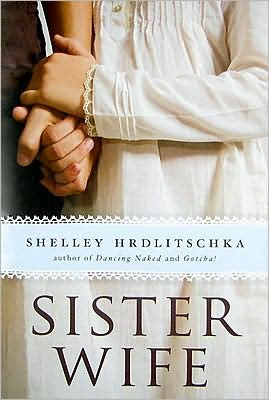 In Unity, plural marriage is the only sure way to eternal salvation. At age fifteen, girls are married off to the older men of the community. Until then the girls must concentrate on purity, and in all things they must bow to the superiority of their fathers. If this path to eternity is ever questioned, ever considered less than satisfactory, then it is clear the girls have lost stumbled from the righteous path and must find their way back to their true destinies--to become wives and mothers, alongside their "sister wives" or their future husband's previous brides.

Sister Wife is an intriguing story about what life might be like in a polygamist community. Told from three points of view, the story remains fresh and increasingly fascinating. Celeste, at age fifteen, dreads her impending future. Which older man will the Prophet assign her to? She hates the idea of marriage and babies, but she doesn't know how she could leave her community, her favorite little sister, or hurt her family by daring to turn her back on Unity. Her thirteen-year-old sister, Nanette, on the other hand, cannot wait to turn fifteen. She feels ready for marriage now and she is anxious to have her first baby. She has a crush on an older man and she is certain that God will reward her purity and faith by assigning her to the one she desires. In the meantime, she watches her older sister falter more and more, and Nanette is especially shocked when Celeste begins meeting secretly with one of the young men of Unity. Finally, we hear Taviana's story. Unlike the other girls, Taviana is a "Gentile," or a teenage girl raised outside of Unity. She's been on her own since age 12. A street kid and a former prostitute, Taviana finds comfort and security in Unity, and she becomes used to the way of life there more easily than anyone could have dreamed. Despite this, Taviana will always be an outsider, and when the police come to Unity looking for her, she threatens the entire population.

In Sister Wife , author Shelley Hrdlitschka deftly creates a polygamist setting. Her characters' conflicts ring true, and she writes respectfully of people with unusual beliefs and whose way of life, while ideal in theory (at least ideal for the older men) leaves no room for individuality or free thought. The book explores the dark side of such a community without turning the characters into caricatures. In a world where women are raised only to become mothers time and time again, what happens to a young woman who just might want something different for herself? Will Celeste choose to leave Unity? That's the main question of the novel, and one I couldn't call. The ending (though in some ways sudden) was satisfying. And the use of three voices to tell the story helped show all of the aspects of a fundamentalist community, its sexism, and its abuse of young women---most of whom don't consider themselves abused at all.

This would be a great book for a book discussion group to tackle. I enjoyed it very much and read it quickly.
Posted by Karen Labels: Karen, Real life fiction, religion