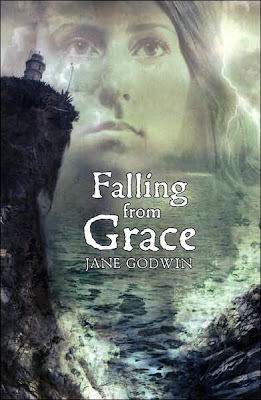 A missing girl. A suspicious teenager. An aging one-hit wonder. Combine these elements for the suspenseful if sometimes choppy Falling from Grace.

One stormy twilight, Grace and her sister, Annie, become caught in a storm on the beach. They've gone way off the beaten path following a penguin. . . yes, a penguin. . .this threw me for a loop and I thought at first the characters were hallucinating but apparently in Australia, where this takes place, you can come across a penguin on the beach, small penguins as they fit into school backpacks (so, not the emperor penguin I was picturing, not at all) . . . Anyway, to continue, the girls try to climb up a cliff. Annie makes it to the top; Grace falls when the cliff crumbles. And that's the last Annie sees of her sister. Did she get swept out to sea? Did she get buried under the debris of the cliff? Where is she?!! In the meantime, Kip, a teen boy who has recently become "troubled" in the eyes of his parents--mostly because he's quit the swim team where he used to excel--meets a few strange people. First he sees a little boy jumping out of a moving a car. Then he encounters a drunk, bleeding man on the beach. The drunk turns out to be a rock star from some decades past. He's a bitter guy who behaves oddly at best, suspiciously at worst. Yet, Kip hangs out with him, gets blood on his clothes helping him and later drinks a rum-laced Coke the guy gives him--all of which makes Kip look really suspicious when he discovers Grace's backpack and a pair of her jeans, now bloodied. The police obviously think he's done something dreadful. Kip keeps digging himself in deeper. The reader knows he's innocent. The reader also knows there's something wrong with the one-hit wonder. So why is Kip spending so much time with him, going back again and again to talk with him? (Well, mostly to advance the plot. . .)

Confused? Well, it wasn't confusing to read, but the story jumped around so much I wondered how it was all going to come together. That jumpiness was essential to the structure the author chose to tell the story--each character must contribute his or her own bit of information and the slow piecing together of the bits solves the mystery--but it took some getting used to. The novel is mostly told in two alternating voices, Annie's and Kip's, and the two seem to be in competition for whose story it really is. Eventually it becomes clear that the story is Kip's--his character is much better developed than Annie's. Then, a third voice suddenly butts in. I was disappointed because A) it feels like cheating, especially considering who it is and B) it felt like a clear plot device. That voice had to be there or the story wouldn't have made any sense. I've read plenty of books that switch points-of-view, but there was something aggravating about this one, maybe because the reader can feel those plot devices in play.

Aggravation aside, I simply had to know how it was going to end. The suspense worked, and I would say it's the book's greatest strength. Is Grace alive or dead? Is Kip going to take the fall for someone else's misdeed? Is Annie going to have to live with the guilt of losing her sister? What is the deal with this weird old rock star? There were also some very nice psychological moments. Halfway through the author really hits her stride in portraying the confusion of a teenage boy who has chosen to abandon the thing that's always defined him. He does some stupid things, but doesn't everybody do some stupid things, especially when they're young and unsophisticated? As for why he keeps doing the things the rock star tells him to--drink this drink, play this guitar, listen to my rambling weirdness--Kip explains "I don't know why I didn't just leave. I suppose you get used to obeying adults who tell you what to do." I realized, right then, that the author had hit the nail on the head. Adults program kids to obey them, so they tend to do that, even to their own detriment.

The ending was satisfying and I was glad I read the book. I got used to the structure pretty quickly and put my minor aggravation aside to get to the meat of the mystery. Worth the time and the read. Now I need to do some research on Australian penguins. . .
Posted by Karen Labels: Karen, mystery, suspense