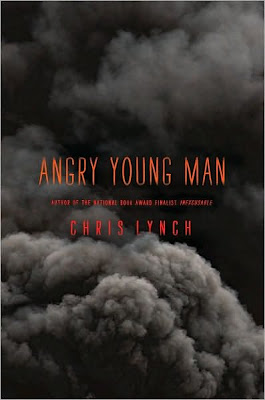 I nominated Chris Lynch's Angry Young Man for our Mock Printz discussion this year. If you don't already know, the Printz award is the highest honor given to a work of young adult literature each year. So far in 2011, I've been having trouble finding truly outstanding titles to nominate. Clearly, I need to be reading more. And posting more.

Angry Young Man is the story of two brothers. The elder, Robert, is our narrator. He's the popular, assured one with the cool girlfriend (Babette), the community college plan, and future goals to be a kids' sports coach. Xan, on the other hand, is the misfit of misfits. It's hard to describe Xan. You really have to read him to get him. He's awkward, super sensitive, socially floundering, and his intensity about injustice rules his life. The book begins with Xan putting on a pair of amber sunglasses that conceal his eyes. Since the eyes are the windows to the soul, Xan doesn't want anyone looking in. You can't help but like Xan, but you know from page one that life has to be an ongoing source of trauma for him. Robert mercilessly but lovingly gives Xan a hard time. All the time. Yet Robert, who never protected his brother adequately in high school, now wants to see Xan figure out his life. The boys both live with their mother. She works all the time, spends much of her life exhausted, yet she insists on sit down dinners with her sons at least once a week. This is a close family. A loving one. And one now tormented by a slimy debt collector who's hounding them over the mother's unpaid credit card bills. When Robert brings Xan with him to his community college classes, and Xan starts attending a social worker's beginning course, Robert little realizes that Xan is going to take a turn for the truly troubling. Suddenly aware of even more injustices plaguing the world, Xan takes up company with a local group of young students whose acts border on terrorism. And there is Xan, the sensitive, misled young man, fulfilling the increasingly dangerous wishes of the group's militant leader. Robert fights to save Xan from the group and from himself (Xan, that is) while at the same time trying to stave off the harrassment of the debt collector. Things begin to spiral out of control, leaving the reader wondering if everyone is going to meet an unpleasant downfall.

Sounds heavy, right? Parts are, though nowhere near as heavy as Chris Lynch's novel from a few years back, Inexcusable. This new book, despite its conflict for the characters, is full of humor. Lynch writes about brothers who fight but love one another from the point of view of a very funny, if angry, narrator. It's the way the narrator speaks and sees the world that makes you like him so much. Robert and Xan are polar opposites, bound by blood. Even when Robert is giving Xan the worst treatment, you know he loves Xan. This is a brief book, but don't let that fool you into thinking there isn't a lot within its pages. Is this the best teen book of the year? Well, I'm not sure of that yet. The ending seemed a trifle abrupt to me, although I also found it very satisfying. But this is definitely one of the better books I've read so far, and I knew from the first few chapters that it deserved consideration.