Kearsten's Book Club, May and June: Stiff by Mary Roach AND Way to Go by Tom Ryan!

Summer has arrived, and in a public library, that means CHAOS. In all forms. And so, unsurprisingly, I forgot to post about our May meeting. Erp.

In an attempt to remedy that situation, I'm using this blog post to tell you about both our May AND our June meeting book discussions. They were both great books - in different ways - and hopefully you'll take a chance on 'em!

May: Stiff : The Curious Lives of Human Cadavers by Mary Roach. 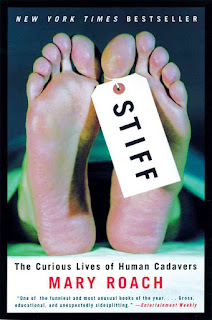 Mary Roach seems like she'd be a pretty interesting person to hang out with. In Stiff, she takes you, the reader, through the world of human cadavers, and all the ways they have been and are now being used to further scientific discovery, safety, forensics, and even plastic surgery.

Our discussion of this book was all over the place. For awhile, we discussed the most disgusting aspects of Roach's storytelling; for example, an hours-long bladder surgery (performed before anesthesia was available) was horrifically described, and the chapter titled "Eat Me" made me gag a couple of times, no lie.

We then made our way to cloning, then to the ethics of scientific research and we traveled all over that map: would you donate your body to science? What would or wouldn't you want it used for? Should family members be notified of the use?

We had a blast discussing this one, and definitely recommend you try it out. Already read it? Try one of these teen-recommended read-a-likes!

The Violinist's Thumb by Sam Kean. "In THE VIOLINIST'S THUMB, [Kean] explores the wonders of the magical building block of life: DNA. There are genes to explain crazy cat ladies, why other people have no fingerprints, and why some people survive nuclear bombs. Genes illuminate everything from JFK's bronze skin (it wasn't a tan) to Einstein's genius. They prove that Neanderthals and humans bred thousands of years more recently than any of us would feel comfortable thinking. They can even allow some people, because of the exceptional flexibility of their thumbs and fingers, to become truly singular violinists."

The Immortal Life of Henrietta Lacks by Rebecca Skloot. Her name was Henrietta Lacks, but scientists know her as HeLa. She was a poor Southern tobacco farmer who worked the same land as her slave ancestors, yet her cells--taken without her knowledge--became one of the most important tools in medicine. The first "immortal" human cells grown in culture, they are still alive today, though she has been dead for more than sixty years. If you could pile all HeLa cells ever grown onto a scale, they'd weigh more than 50 million metric tons--as much as a hundred Empire State Buildings. HeLa cells were vital for developing the polio vaccine; uncovered secrets of cancer, viruses, and the atom bomb's effects; helped lead to important advances like in vitro fertilization, cloning, and gene mapping; and have been bought and sold by the billions.

An American Plague by Jim Murphy. It's 1793, and there's an invisible killer roaming the streets of Philadelphia. The city's residents are fleeing in fear. This killer has a name--yellow fever--but everything else about it is a mystery. Its cause is unknown and there is no cure. This [book] traces the devastating course of the epidemic. [The book] offers a ... glimpse into the conditions in American cities at the time of our nation's birth while drawing thought-provoking parallels to modern-day epidemics. 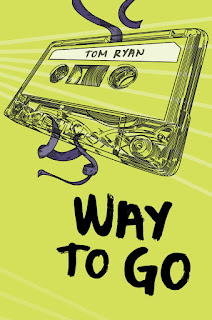 In this historical fiction book set in 1994 (calling a book set during my high school years "historical" breaks my heart, btw), Danny spends the summer before his senior year trying to hide from something he's slowly beginning to realize: he might be gay. Okay, he's pretty sure he is gay, but he can change that, right?

Danny lives in a small town in Canada, and a lot of our conversation was about what that might be like. Our discussion leader mentioned that one of the complaints he'd found in online reviews of the book was that 'coming out' books like this one always seem to have this setting, which led to a ton of questions like: is it tougher to be "different" in a small town? Why might that be? And would we survive in a small town like Danny's? A couple of our teen book clubbers have lived in small towns themselves and shared their own experiences, along with the strangeness of everyone knowing your name (and parents, and grades, and exploits...)

Side note: Alma, Danny's little sister was amazing. One teen mentioned that she was being added to his fictional family, which makes total sense to me! Someday, I need to compile a list of awesome siblings in books...

Overall, we liked this book and recommend it to ya'll. Already read it? Why not try one of these books also about teens in small towns, coming out or otherwise?

Shine by Lauren Myracle. When her best friend falls victim to a vicious hate crime, sixteen-year-old Cat sets out to discover the culprits in her small North Carolina town.

The Raven Boys by Maggie Stiefvater. Though she is from a family of clairvoyants, Blue Sargent's only gift seems to be that she makes other people's talents stronger, and when she meets Gansey, one of the Raven Boys from the expensive Aglionby Academy, she discovers that he has talents of his own--and that together their talents are a dangerous mix.

Where Things Come Back by John Corey Whaley. Seventeen-year-old Cullen's summer in Lily, Arkansas, is marked by his cousin's death by overdose, an alleged spotting of a woodpecker thought to be extinct, failed romances, and his younger brother's sudden disappearance.