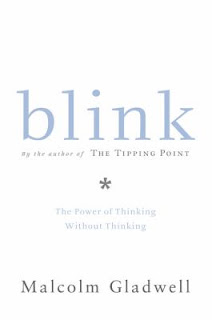 How do we think without thinking, seem to make choices in an instant--in the blink of an eye--that actually aren't as simple as they seem? Why are some people brilliant decision makers, while others are consistently inept? Why do some people follow their instincts and win, while others end up stumbling into error? And why are the best decisions often those that are impossible to explain to others? Drawing on cutting-edge neuroscience and psychology, the author reveals that great decision makers aren't those who process the most information or spend the most time deliberating, but those who have perfected the art of filtering the very few factors that matter from an overwhelming number of variables.

The group agreed that this month's book was a bit of a challenge - nonfiction not being of high interest. However, despite the fact that about half of the teens didn't finish the book, we still had a lively conversation!

The topics we focused on were the chapters about the drawbacks to thin-slicing/split-second decisions (illustrated by a police shooting), the need for context in thin-slicing (experts being better at analyzing tiny bits of information), and emotion (whether or not we bought the facial-expressions-creating-emotional-responses. We do.).

We also tried the Pepsi vs. Coke taste-test challenge, with several of our teens guessing correctly! None of them are interested in becoming expert taste-testers, though, as the training sounds crazy intense.

Already read Blink? Why not try one of these book clubber-endorsed recommendations?

Outliers: the Story of Success by Malcolm Gladwell. The best-selling author of Blink identifies the qualities of successful people, posing theories about the cultural, family, and idiosyncratic factors that shape high achievers, in a resource that covers such topics as the secrets of software billionaires, why certain cultures are associated with better academic performance, and why the Beatles earned their fame.

David and Goliath: Underdogs, Misfits, and the Art of Battling Giants by Malcom Gladwell. Uncovers the hidden rules that shape the balance between the weak and the mighty and the powerful and the dispossessed.

All-American Boys by Jason Reynolds and Brendan Kelly. When sixteen-year-old Rashad is mistakenly accused of stealing, classmate Quinn witnesses his brutal beating at the hands of a police officer who happens to be the older brother of his best friend. Told through Rashad and Quinn's alternating viewpoints.

How it Went Down by Kekla Magoon. When sixteen-year-old Tariq Johnson is shot to death, his community is thrown into an uproar because Tariq was black and the shooter, Jack Franklin, is white, and in the aftermath everyone has something to say, but no two accounts of the events agree.

Why Eyewitnesses Get It Wrong. Scott Fraser studies how humans remember crimes — and bear witness to them. In this powerful talk, which focuses on a deadly shooting at sunset, he suggests that even close-up eyewitnesses to a crime can create "memories" they could not have seen. Why? Because the brain abhors a vacuum.

Great blog for teenagers and also the book are really impressive.Meet and greet at Luton airport