Typically when one thinks of crossdressing, it's not with a shojo manga (girl comics) mindset. But there is a whole subgenre of drama/romance/comedy that plays on a main character crossdressing. I thought I'd highlight a handful for you. Surprisingly, I have found them to be one of my favorite shojo reads. 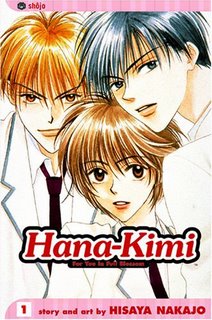 Hana-Kimi: For you in Full Blossom by Hisaya Nakajo is all about an American girl, Mizuki Ashiya, who goes to school in Japan to be closer to the high jump athlete, Sano Izumi, whom she admires. The twist is that she enrolled herself in an all boys school, so to fit in, she chops her hair, wears a restraining bra, and tries to act like a boy. All of this, just to see a boy high jump. When she finds out that Sano doesn't compete anymore, she's determined to find out why and to convince her now roommate, Sano, to try again. The twist in this crossdressing piece is that Sano discovers early on the Mizuki is a girl and decides to keep her secret. Each volume in this long running series has some sort of drama of Mizuki almost getting outed that adds some extra spice to this manga. 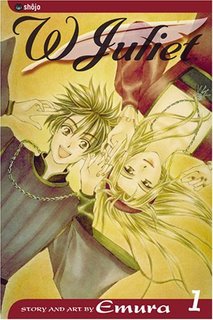 Ito Miura (the brunette) is a tomboy. She loves to act, but is always stuck being the male role because of her height and boyish looks. Then she meets the new girl, Makoto Amano, a beautiful, poised girl who wants to be an actress. Immediately, Ito helps Makoto out by showing her the ropes at the drama club. Makoto gets a surprise quickly when Ito changes in front of her--she thought Makoto was a boy!

As their friendship grows, Ito invites Makoto over to her family's house, a local dojo. When Makoto gets sprayed by a water hose (held by one of Ito's brothers), Ito offers her a change of clothes. Of course, this is when Ito discovers Makoto's secret--she's a he. Yup, here's the crossdressing. In order to be an actor after high school, rather than take over his family's dojo, Makoto must get through high school without anyone discovering that he is not a she.

Of course, now someone else knows his secret and Ito discovers that she has a whole other set of feelings for Makoto than just friends and will do anything to help him succeed.

There's so many more crossdressing manga out there, but these are available at the library right now...
Posted by Kristin Labels: Kristin, manga, romance