Do You Prefer Your Zombies Smothered in Technology, With a Side of Magic or Just a Dash of Reality?

A little like The Stand, with quite a lot of zombie-movie thrown in (which is to be expected, considering one of the dedicatees is George Romero, the granddaddy of zombie movies), Cell, by Stephen King, follows Clay, a regular kind of guy. Ecstatic about having just sold his first two graphic novels, Clay stops for ice cream in downtown Boston, and ends up witnessing the fallout of what he and other survivors begin to call the Pulse: every person who uses their cell phone suddenly has his/her brain wiped clean of everything except the urge to kill. Realizing what’s happening, Clay joins with a couple other survivors and tries to get home to his ex-wife and son, desperately hoping that he can find to them before the Pulse does.

Cell is not for the faint-hearted, as there’s tons of gore (in the beginning, Clay watches a victim of the Pulse tearing off a dog’s ear with his teeth). However, if you don’t mind the gore, Cell is a great read. It’s suspenseful, fast-paced, and, even better, I was delightfully reluctant to use my cell phone the whole time I was reading it. I also caught myself crafting my own “In-Case-of-Zombie” plan… (for more about Cell, see Greg's excellent posting from Feb. 15th)

If, instead, you prefer your zombies created by magic, try the seventh entry in the fantastic Harry Dresden series, Dead Beat, by Jim Butcher. Dead Beat finds Harry, a wizard whose main line of work is as a private investigator in modern-day Chicago, faced with trying to save the world from power-hungry necromancers who – you guessed it – use zombies for their dirty work.

Now, one of the things I love about the Dresden series is that Harry’s world is very similar to that of, say, the TV series, Buffy, the Vampire Slayer: while it looks normal to most people (us, for example), Harry and his friends/cohorts (and Buffy and the “Scoobies”) know that there’s a very seamy and scary world that we normals don’t see, full of magic, faeries, werewolves, vampires and everything else that goes bump in the night. Harry’s also my favorite kind of hero: a reluctant badass with a dark, sarcastic and sometimes silly sense of humor.

No, you don’t absolutely have to read the whole series in order to get what’s going on in Dead Beat (though I definitely recommend the series, ‘cause it’s a blast), this seventh installment is my favorite. Harry’s especially reluctant lately, seeing as he’s got a new roommate, he’s not in the best shape he’s ever been, and he’s forced to dodge numerous bad guys, most more powerful than he. The big payoff is the when the, er… poo hits the fan: a more rollicking – yet tense and terrifying – good time I’ve not had in a long while.

The Zombie Survival Guide: Complete Protection from the Living 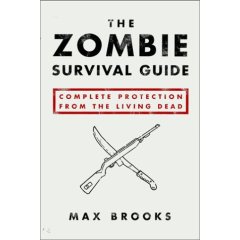 And finally, if, like me, zombie books and movies get you wondering what you would do, try The Zombie Survival Guide: Complete Protection from the Living Dead, by Max Brooks. Chock full of great advice for surviving any zombie attack, this tongue–in-cheek guide is a must-read for fans of the horror book/movie genre. My favorite advice? From the “Top Ten Lessons for Surviving a Zombie Attack: 3. Use your head – cut off theirs.”

What makes The Zombie Survival Guide even better are the ‘factual’ accounts of zombie attacks throughout history. Some are written so matter-of-factly (and are so creepy) you’ll be half-tempted to believe them. I know I was…
Posted by Kearsten Labels: horror, Kearsten, zombies