What would you do if the world was to end on your birthday? 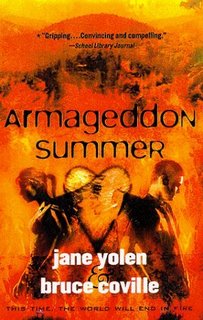 That would suck, wouldn't it? "Happy birthday! Don't mind the flames!"

In Armageddon Summer by Bruce Coville and Jane Yolen, the end of the world lands on Marina's birthday according to Rev. Beelson. Her mother has become a Believer at Rev. Beelson's Church of Believers. The Believers think that the world will end on July 27th and to survive, 144 members of the Flock will camp at Mount Weeupcut while the world downmountain will go up in flames.

Marina is a Believer, but once up on the mountain, she begins to have doubts. How could God want to destroy all of the other innocent people and not them? And what about her dad? How could he just let her brothers and her go? She's not the only one in the Flock with doubts. Jed has only come to watch over his dad. Since his mom left with a photographer, his dad has become his responsibility. He's not a Believer, he thinks they're all nuts. But then he sees her and her Chestnut Hair.

In alternating chapters, Jed and Marina tell us their story of their summer with the struggles of beliefs, the fear of Armageddon and the Believers, and falling in love for the first time with only a week before the end of the world.
Posted by Kristin Labels: Kristin, Real life fiction, religion

By the way, July 27th is *my* birthday, so how do you think I felt when I read that book?? I wanted to know why Jane Yolen had chosen my birthday to end the world. It was a little traumatic for me.