I Want My AIP

So, I’ve been addicted to books forever, and yes, I have been known to skip dates ‘cause the book I was reading had just gotten that good. This, of course, was years ago, and that boyfriend long gone, but I was reminded of him, sort of, recently while reading. This old boyfriend was friends with a foreign exchange student from New Zealand (yeah, I know, “Whoa! Lord of the Rings!!!” Except for the fact that this was, oh, ten years ago, and the more accurate statement would be, “Whoa! Xena: Warrior Princess!!” A lot less cool… Sorry, Xena fans).

We were out one evening, and Tony, the New Zealander, was incredulous that I had chosen not to party the previous weekend because I was too wrapped up in the fantasy series I’d just been introduced to (Robert Jordan’s Wheel of Time series, to which I am still addicted). Tony thought my obsession with reading ridiculous, and wondered what I possibly got from books. I told him how I loved getting caught up in a good story, and that I also often learned from what I read – a statement which prompted him to burst out laughing and ask where I thought knowledge of how to properly kill a dragon would come in handy. No, I didn’t tell him that there currently were no dragons in the book I’d been reading (as that’s a level of dorkiness I work very hard to avoid), and no, I didn’t actually say anything clever. Regrettably, I’m one of those think-of-a-bitingly-clever-reply-several-days-later persons… 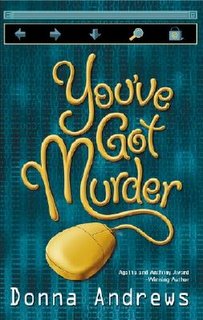 Anyway, the reason for this story is You’ve Got Murder, by Donna Andrews, which puts forth a decent argument for the idea that fiction can teach ya things. In it, Turing Hopper discovers that her friend and coworker, Zack, is missing. Worried, Turing begins searching for clues to his whereabouts, but must enlist the help of two coworkers, as she is unable to leave the Universal Library, where she is “employed.” And I do mean “employed” (and yes, I would be using those irritating air quotes if you and I were talking face-to-face), as Turing doesn’t get paid for her work as a research assistant to users of the Universal Library’s website. And why doesn’t Turing get paid?, you ask? Why, because she is an Artificial Intelligence Personality, or AIP for short.

Zack is her programmer and Turing is the top performer in the UL’s AIP department. She’s also sentient – as close to alive, aware, and as humanlike as an AIP can get. Zack and Turing both believe her success is due to the fact that as part of her programming, Zack downloaded thousands of murder mysteries into her, thinking this would make her a better researcher – more like Sherlock Holmes, only with a monitor and keyboard instead of a cap and pipe. And it works! Turing is so good at thinking like a detective that she discovers a nasty plot behind Zack’s disappearance. She also begins to wonder about sentience – for instance, is it possible for her, essentially a machine and some lines of code, to feel nervous? Or is she imagining nervousness because she’s learned so much about humans, both from her extensive research and from all those mystery novels? And is an AIP even capable of imagination?

So, not only can a computer program learn about human nature and solving mysteries from books - while compiling a list of suspects, she’s particularly suspicious of the lawyers on the list, as she’s “scanned quite a number of legal thrillers by Grisham...” - , but I can, in turn, learn a bit about (and get just a teeny bit frightened of the possibilities of) Artificial Intelligence.

Tony will be really in trouble when the dragon overlords rise again. Whereas all of us fantasy readers will know what to do.

(Hey, if Christian Bale can't defeat a dragon, some guy from New Zealand stands no chance)

I remember Tony. He ate a lot of Big Macs