So, Where were YOU Tuesday night?

Watching TV? Reading a good book? Maybe you were goofing off of the computer, reading your favorite librarians' blog.

Well, I was in a movie theatre with my husband and my 4 year old, watching the premiere of Superman Returns.

And, while holding my sleeping kid, and watching the movie, it occurred to me -- I'm not that into Superman.

I mean sure, I respect the guy -- he kind of set the mold for all superheroes that came after him, and he has the longest running continuing comics series in history.

But -- I mean, he's just not that interesting to me. He's so good, and (ignoring the travesty that was Superman 3) he'll always be good, always do the right thing. I prefer my heroes with a tad more darkness to them -- Batman, Wolverine, the Authority, the Outsiders, Hellboy, Invincible.

However, some very excellent comics writers and artists have taken on Superman, and its always my pleasure to recommend good comics. 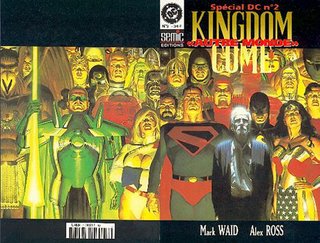 DC Comics has this thing they call Elseworlds -- it's kind of an alternate universe from the regular DC universe, where strange things can happen. My favorite Elseworlds title is Kingdom Come. In it, Superman has abandoned Earth, as the daughters and sons of his contemporaries have come to act as protectors of humanity. These new metahumans have all of the power of their forefathers, but few have the self-control or sense of responsibility that Superman has. When a group of metahumans causes a nuclear holocaust, Superman must leave his self-imposed exile, and again take charge... Written by Mark Waid and illustrated by the amazing Alex Ross, this is a great story with beautiful artwork.

Superman stands for Truth, Justice and the American way, right?

But, what if he didn't? This is the question asked by another Elseworlds title -- Red Son. In this graphic novel, baby Supes didn't land in a Kansas cornfield, he landed in a Soviet commune. And so Superman is a socialist, a communist, the favorite of Joesph Stalin. As America watches helplessly, Superman spreads Soviet doctrine across the globe, and looks to bring the United States under his rule. America's only hope is the brilliant scientist Lex Luthor -- who abandons his wife Lois Lane to defeat Superman. The writer on this, Mark Millar, isn't my favorite (I quit reading Ultimate X-Men because of him) this is a great book, with a corker of an ending.

Finally, we have Trinity. I'll be honest -- I didn't read this book because of Superman. I read it because of Batman and Wonder Woman, who make, in my opinion, the greatest almost-couple EVER. But Superman is key to this story, which is a kind of retelling of his early days, and how the "Big Three" of the DC universe met. It's written and illustrated by the unbelievably talented Matt Wagner and gives a great insight into these iconic characters.

And because everybody is asking me, I will say I did like Superman Returns. It was a little long, and I don't think Kate Bosworth made a very good Lois Lane, but it is a good movie.

Aaaahhhh, bald bad guys. There's just *something* about them, isn't there?