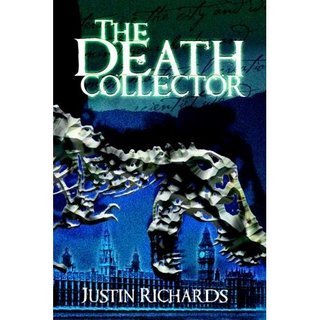 I haven't been reading much this summer, but I have listened to books on CD on my drives. I had read some pretty great reviews about Death Collector by Justin Richards and so I had to read it.
Death Collector is a historical adventure mystery. Set in the Victorian era, three teens and a curator at the British Museum strive to solve the mystery left in a journal of a deceased scientist before a wealthy businessman, mad scientist figures it out and uses the information for his dastardly plans to become a god.
With a cover like this, how could you not want to read it? The story slowly unfolds--connecting each other the characters together, then the adventure steamrolls into action. This novel defies definition. It has mechanical dinosaurs, unexplainable inventions, a street urchin, an engineer, a wannabe actress, and oh yes, zombies.

If the first line doesn't get you to read this book, I don't know what will: "Four days after his own funeral, Albert Wilkes came home for tea."

If you enjoy historical adventure stories, you should also try: the Montmorency series by Eleanor Updale and Fleshmarket by Nicola Morgan.
Posted by Kristin Labels: historical fiction, horror, Kristin