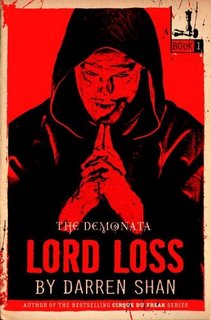 Lord Loss, book 1 in the Demonata series by Darren Shan (author of the popular Cirque Du Freak series), is a great read, but definitely not recommended for anyone with a weak stomach. The title of the first chapter…Rat Guts…makes this fact quite clear to the reader early on.

By the second chapter our unfortunate teenaged protagonist (Grubbs Grady) arrives home to find his father hanging upside down and headless from the ceiling, his sister split in two, and his mother being eaten by a dog-like creature with the head of a crocodile! Before Grubbs can even begin to process the carnage before him, he is confronted by the horrific demon Lord Loss and his vile sidekicks Vein and Artery. After a very narrow escape from the demons, he is sent to a mental hospital to recuperate from his trauma.

Grubbs eventually leaves the hospital and goes to live with his eccentric Uncle Dervish in an ominous castle-like estate in the English countryside. There, Grubbs begins to uncover the mystery behind the murder of his family…a mystery involving werewolves, magic, and a deadly game of chess.

I enjoyed reading Lord Loss so much that I immediately checked out Demon Thief (Book 2). Slawter (Book 3) is due to be released in November 2006.
Posted by Greg Labels: Greg, horror