I admit it. I am a closet wanna-be superhero. Yes, I have contemplated what type of powers I would (the ability to manipulate air molecules – Dude... I could do practically anything!) and would not (telepathy – all those voices in my head, and what if someone was thinking something mean about me?!?) want to have.

Because I want to have super powers – which I would definitely use to get back at all the mean girls and bullies in my past, and would probably, eventually, use to save lives, avert tragedy, yadda, yadda – I love reading books about ordinary (and not so ordinary) people with extraordinary abilities. And yes, I have been watching the TV show, Heroes, and enjoy it so far. I especially love the Japanese office worker, Hiro, who can teleport, and I also enjoyed his discussion with a coworker about using his powers for good and not for gain, though I’m definitely not that idealistic… as you well know, given the fact that I’ve already admitted I’d first use my powers for revenge – a trip-them-repeatedly-while-walking kind of revenge, not evil revenge. Geez! However, I do have one “beef” with the show: what’s with the only two (so far) female heroes being blonde? C’mon, NBC – Jean Grey and Rogue have shown the world that non-blonde gals can be superhero bad-...er...-‘tushes’, too! 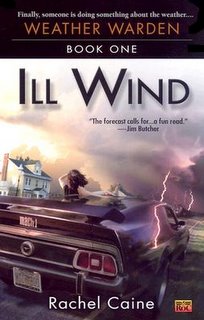 Anyway, back to books… I just finished reading one about a feisty, female ‘superhero’: Ill Wind, by Rachel Caine. The first in her Weather Warden series, Ill Wind opens with Joanne Baldwin, a Weather Warden, on the run. It seems her ability to manipulate the weather (an ability she uses as a Warden to protect humans from the deadly forces ‘Mother Nature’ would otherwise use to wipe out us all) has gotten her into big trouble.

Among her problems: she's an accused murderer, meaning that the branch of Wardens responsible for removing the ‘powers’ of rogue wardens is chasing her; an incredibly powerful storm keeps following her and trying to fry her with lightning bolts; and she’s in possession of one ugly, and slowly debilitating demon mark, which, if anyone finds out about it, and if she manages to get outta the murder rap, will ‘mark’ her for major power-removal - stat!

Ill Wind is fast-paced, exciting, and Joanne is one of my favorite kind of characters: sarcastic, intelligent and – oh, yeah – she’s one of the most powerful Wardens in the world, though she doesn’t quite believe it yet.

And she drives a classic Mustang.

And she’s a brunette.