Much Ado about the Wild West

I love the Old West. I love reading about it, watching TV shows and movies about it, and the only research paper I ever enjoyed writing was one in which I wrote about women in the Wild West. That paper was a teeny bit skewed, though. While I did write about some reputable women, I mostly focused on the 'bad girls' - the outlaws and the soiled doves.

And, if time travel were possible, the Old West would be number one on my list of eras to visit. 'Course, I'd have to get my olfactory glands removed first, what with the lack of deodorant, daily bathing habits, and minty fresh toothpastes available back then. The overwhelming stank generated by all that would likely cause me to vomit. Repeatedly. 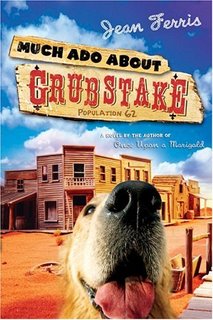 However, with no access to time machines, and with my olfactory senses in tact, I'm forced to find fictional substitutes. Thankfully, I do manage to find gems, as I did in Much Ado About Grubstake, by Jean Ferris. This delightful story is set in 1888 in Grubstake, Colorado, a town that hasn’t seen a gold strike in years. Arley is bored – she runs a boarding house in the tiny town of Grubstake and though none of her four boarders have been able to pay her for months, she still manages to get along, as she must, ever since the day, two years before, that “Arley’s own father, never much good with dynamite, blew himself out of his mine and into Kingdom Come – with a few swell loop-the-loops as he went.”

In fact, the only thing that keeps sixteen-year-old Arley from expiring from boredom are the boxes of Penny Dreadfuls that arrive once a month, and which she must ration, so as not to run out of them before getting the next shipment. With titles like Badgirl in the Badlands, The Danger of a Texas Ranger, Rustler’s Rhapsody, and Clarissa and the Cowboy, Arley gets from them the only adventure she thinks she’ll ever have.

It’s not until two mysterious strangers arrive in town (one of whom is tall, dark and dangerously handsome) that things start gettin’ exciting. And when one of the strangers announces that his employer is willing to pay handsomely for all the mines in the area in order to build a resort, Arley can’t help but be suspicious of the stranger’s true motives and sets out to discover what the two men are hiding. Soon enough, Arley begins having an adventure of her very own.

Now, while Much Ado About Grubstake is an easy read (you’ll find it in our youth fiction collection), it’s also a fast-paced and funny one. And if you’re also a fiend for stories set in the Old West, try this one. It’ll leave you smiling. Which is much better than spewing.
Posted by Kearsten Labels: historical fiction, Kearsten