Who all reads Chris Cructher books? They're award-winning, edgy, gritty, realistic fiction that make you happy to not be some of the characters in the books. He's also one of the most challenged, as in book banning, teen writers. We have all of his books and they circulate enough to warrant having two copies of them. But I can only think of one or two teens this past year asking for one of his books. 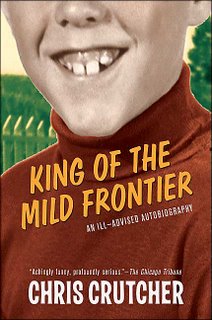 So that brings me to his autobiograhy: King of the Mild Frontier: an Ill-Advised Autobiography. The stories found in this book are like the ones your father tells you. My dad's favorite story to tell me was about the piston. When he was younger, he was tuning his engine on his car. He was manipulating it so that he could get better racing out of it. His dad came out and said that if he does anymore to that engine, then he's going to blow the engine. Dad didn't listen, went racing, and sure enough the engine blew and the beauty of a Mustang was dead and he kept the piston of that Mustang to remember his lesson. The lesson my dad learned was to always listen to your dad. When my dad told my sister and I that story, we kind of looked at him funny and asked innocently, "What's a piston?" Dad still has that piston and hopes that one day his grandsons will appreciate the lesson more than we did. Looking back, I appreciate it more than I ever did back then. But it is always nice to know that your dad was a teen too once and that he used to do nutty things like car racing down unfinished highways. Makes him more human.

This autobiography has an abundance of hilarious childhood memories and harder to take stories of being a therapist. Probably my favorite story is of his older brother's baptism in a hot spring that had cow patties around it. I thoroughly enjoyed the book.

While I enjoyed the passages, and it is a quick read, I kept thinking "Why did this get published? Who is going to read this?" This probably isn't convincing you to read the book, even though it is a great book. But that's my real thoughts on it.
Posted by Kristin Labels: biographies, Kristin