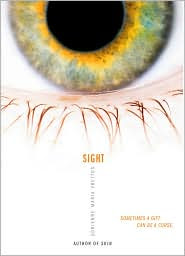 I read this one all in one night. Every time I thought about putting it down, my curiosity got the better of me and before I knew it, I was turning the last page.

Sight by Adrienne Vrettos is the novel of a small town collectively affected by the murder of a young boy and the fear that results when law enforcement fails to catch the killer. Dylan, now a teenager, was only five-years-old when her school classmate went missing. She knew before anyone else did that he was dead, because that was the first time Dylan ever experienced “the sight,”otherwise known as a psychic vision. Sure enough, her young friend had been murdered, and then the entire town was nearly torn apart by the resulting suspicion and fear. Eleven years later and the murderer, nicknamed The Drifter, is still on the loose—and possibly killing again, in nearby towns. Suddenly the creepy rhyme Dylan and her circle of friends made up at the time of their classmate’s murder seems more accurate; just like in the rhyme, the Drifter is coming back and nothing seems to be stopping him.

Although friends in small towns tend to be close-knit, the closeness of Dylan’s group has always been magnified by the death of the child in their kindergarten class, as though the tragedy bound them together in ways that the rest of the town couldn’t fathom. And that’s why it’s so hard for Dylan to keep the truth from her friends—that she experiences visions and uses them to lead the police to the scenes of crimes. Since Dylan can only see a child during his or her last moments alive, the process of detection is always a grim and draining one. Dylan only helps the cops find bodies, never living victims. And Dylan is also one of the first to realize that the Drifter may indeed be back. Dylan wants to tell everything to her best friend, Pilar, but can’t bring herself to do it, so it’s a surprise, even to Dylan, when she spills the truth about herself to Cate, the new girl in town. Cate is more than a willing confidant—she seems to become obsessed by the Drifter and the details of the murder that bind the town kids together but seem to leave her on the outside of the circle. As Dylan grows closer to Cate, her friendship with Pilar becomes strained, and as the Drifter moves closer into everybody’s sphere, the town threatens to crack under the pressure.

Obviously I liked this, considering the speed with which I devoured it. I especially liked the question of how well we know our best friends, and the idea that anyone could be keeping secrets, motivated by any number of reasons to do so. I enjoyed the creepy tone of this and the portrayal of the ties that bind more than I enjoyed the solution to the unsolved murder. The “surprise ending” in which The Drifter’s identity is revealed seemed glaringly obvious to me, but was also a little convoluted, to the point where I just had to shrug and say, “Okay, that was stretching, but I liked the book so much I will accept it.” The richness of this book is in the main character’s conflict about her “gift” and the portrayal of friendship put to the test.

I loved Adrienne Vretto’s first book, Skin, and am happy to be able to recommend Sight as well. I can't wait to see what she writes next.
Posted by Karen Labels: Karen, supernatural, suspense