The Day I Killed James 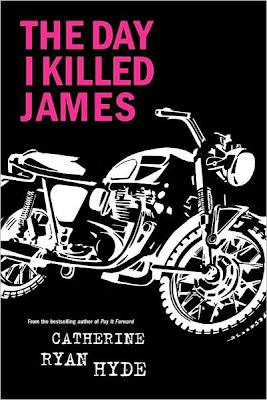 How do you do penance when you're responsible for the suicide of an old friend? If you're seventeen-year-old Theresa you shave your head and tattoo his name on your body. And you never, not for one minute, forget that he loved you and you were careless with his heart. So you beat yourself up about it, and no one--not your therapist, not your best friend, not your father--can change your mind. Everything is now measured in before and after the day you killed James.
Theresa never meant for James to get hurt. She just wanted to stop the hurt she felt when her boyfriend, Randy, dropped her for another girl. To get even, Theresa brought James to the biggest party of the year and made out with him. The jealousy tactic worked all too well. Randy wanted Theresa back, and she forgot all about James, the slightly older guy, the next-door-neighbor who had carried a torch for Theresa so bright it would rival the Statue of Liberty's. After Theresa's cruel rejection, James drove away on his motorcycle . . . and over a cliff to his death. Leaving Theresa with survivor's guilt, and an incredible story.
The Day I Killed James is the first book I've read by Catherine Ryan Hyde, probably best known for her best-seller, Pay It Forward. This is her third book for teens, and it's very good. Theresa's voice is what carries this novel. Her guilt is palpable, and the lengths she goes to try to atone make for a wonderful plot. The author really hits her stride when Theresa leaves home, tries to assume a new identity, and finds herself unable to run away from the massive hole James has left in her life. Then she meets a young girl with problems of her own, and the book takes off in directions I never expected. This is a novel of a journey, away from oneself and back, a novel of survival, and and a novel that questions if it is possible to forgive oneself for a carelessness that resulted in another's death.
Now that I've read this one, I am eager to try more of Hyde's work, and I can only hope that the other books are as good as this one.
Posted by Karen Labels: death, Karen, Real life fiction