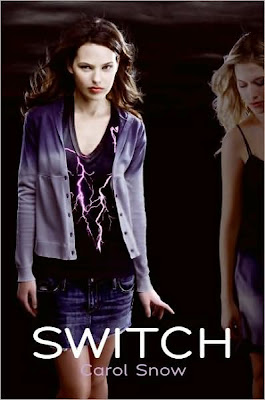 Fifteen-year-old Claire Martin might hijack other people's bodies but she doesn't do it intentionally. Thanks to a genetic quirk, heavy electrical impulses such as lightning storms sometimes send her spirit/soul/essence/whatever-you-call-it into another person's body. Claire wakes up in an unfamiliar room, looks in the mirror, and sees someone else staring back at her. Unsettling? Not so much. This musical-chairs-with-bodies routine has happened to her so often, she's used to it, especially since the ghost of her grandmother helpfully takes up residence in Claire's body during these "switches" while the original resident of the hijacked body floats about in the ether until sleep brings them all back where they belong again.
Did you follow all of that?
It may sound convoluted but Carol Snow makes it all seem perfectly sensible in her book, Switch.
Life is confusing but manageable as a switcher, but the plot thickens when body-swapping Claire wakes up one day in a beautiful girl's body. Claire's never been this gorgeous before, and she happens to know that her crush, Nate, has a huge crush on the girl Claire now inhabits. Claire doesn't intend to stick around posing as Larissa--at least not consciously--but events conspire to keep her from being able to go back to her regular body. And when Nate begins to pay attention to "Larissa," never suspecting that she's actually a girl he's known his whole life but never seemed to see, Claire decides to stick around. . . just for a little while.
Switch is a fast read and a well-written one. For some reason the cover didn't give me much hope for its literary merit but I was pleased to have misjudged the book by the cover. I liked the characters, especially the ghost of Claire's grandmother, who was possibly the most interesting character in the book. Turns out grandma was also a switcher but something went wrong--something she never wants to talk about. In some ways I'd rather Carol Snow had told the grandmother's story as a young woman, but we have Claire's instead and that is interesting too. If you like the slightly supernatural, go for this one. The focus is really more on relationships and friendships, and issues of body image than on the eerie or otherworldly.
Posted by Karen Labels: Karen, romance, supernatural