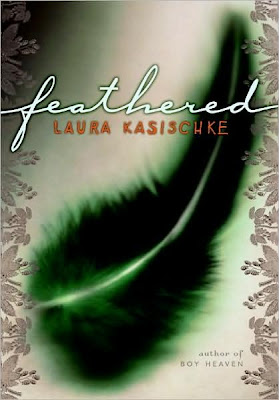 I started Feathered by Laura Kasischke last night. This morning I am on page 208, hurtling toward the end.

A sense of impending doom hangs over this tale—the tone set early on, almost from the first line. The reader doesn’t know exactly what has happened, but it’s clear something terrible has. The author’s beautiful writing, infused with an underlying current of great unease, seduces the reader, whose discomfort and worry grows as the plot unfolds.

Feathered opens with three Midwestern girls in their senior year of high school embarking on what is supposed to be a fabulous spring break trip to Cancun. Shortly after they arrive, the trio splits up, with the most outgoing of the girls pursuing drinking and romance. The other two find themselves less drawn to the party scene. Wandering into a quiet corner of the hotel bar, they meet an older man. He seems friendly enough and harmless enough, though a stranger, and before they know it, they’ve agreed to tour a Mayan pyramid with him. As soon as they’re in the car though, eighteen-year-old, Anne realizes they’ve made a mistake. The man, Ander, seems obsessed with death and sacrifice; he’s not quite right. Anne is desperate to get away from their tour guide, but Michelle—dreamier, introspective, and more unusual than her friend—senses a deep connection with this pseudo father-figure. As much as Anne wants to leave, Michelle wants to stay. The reader finds herself torn between the two disparate views of the girls—is Ander a threat or is he just a lonely man passionate about anthropology? Where does the real danger lie? The reader wants to cry, Run!—but run from what, to what? The more Anne identifies Ander as a terrible threat, the more Michelle seems to cling to him. Soon, it seems as if Michelle will follow Ander anywhere he asks her to go, from the top of the pyramid where human sacrifices were once made to the depths of the inner pyramid, where the hearts of the victims were laid on the altar. What does Ander want from Michelle? Can Anne get them out of this, whatever this is?

The sense of dread, of something awful about to happen, hangs over this novel like a shroud. That’s not negative criticism though. Kasischke writes beautifully, poetically, drawing the reader into the story not only with powerful description, but with a deft understanding of human motivation. The author’s writing seduces the reader almost like Mexico seduces the characters of this novel. In some ways this is The Ruins for teens, minus the supernatural element. Both books are about young American tourists whose idyllic Mexican vacations turn nightmarish; both describe the psychological reactions to that horror.

I’m anxious to get to the end and yet I want to take my time reading it too. Unless the author ruins the ending in the next 40 or so pages, I would highly recommend this.
Posted by Karen Labels: Karen, suspense