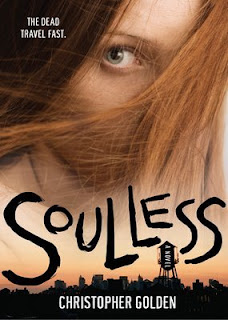 The tragic event that comes to be known as “the uprising” begins on the set of the Sunrise morning show in New York City. Three world renowned mediums have been invited to conduct a televised mass séance to give the dead an opportunity to communicate with the ones they have left behind. Unfortunately, the dead have something else in mind…

Soulless brings up an interesting theory believed by some to explain the existence of ghosts. The theory is that a person’s soul and spirit actually separate at death. The soul, which is the pure and divine part of who we are, moves on to whatever eternal afterlife one believes in. The spirit, which is energy generated by who we are in terms of our personality, thoughts, memories, etc., sometimes sticks around after death to haunt a house or something. In Soulless, the spirits of the dead actually repossess their bodies (or what is left of them).

Soon after the séance begins, things begin to go terribly wrong. The mediums become catatonic and their linked hands become inseparable. In cemeteries along the East Coast, the dead begin to rise up from their graves. Some of them just want to go home again to see their loved ones, but most are hungry for the only thing that can ease their “emptiness”…human flesh!

Soulless follows the stories of various teens dealing with the uprising including the daughter of one of the mediums. There’s blood and guts galore and plenty of “edge of your seat”-type action…These zombies are of the fast-moving variety, as opposed to the slow shuffling variety featured in older classic zombie movies like Night of the Living Dead. Fans of raw, fast-paced, zombielicious horror will not want to miss reading this one.
Posted by Greg Labels: Greg, horror, zombies