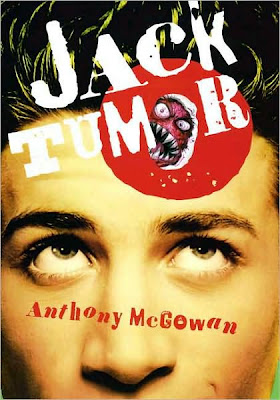 Aren't brain tumors just hilarious? Okay, you might not think so now but you will after reading Jack Tumor, a British novel for teens in which our hero, Hector, a firm member of the nerd tribe, experiences a huge turnaround when he develops a brain tumor that begins speaking to him. Jack Tumor, as the brain tumor is known, realizes his days are numbered and he wants to enjoy his symbiotic life experience with Hector to the fullest. He gives Hector direction, sometimes even taking over Hector's body when Hector shows reluctance. Soon Hector finds himself standing up to bullies and catching the attention of Uma Upshaw, a girl way out of his league. Yet he's also drawn to a "freak" girl whom Jack Tumor assures him isn't worth his time. Likewise, Jack finds Hector's circle of nerd friends less than satisfactory and makes several attempts to sabotage the friendships. Either Jack Tumor is going to fix Hector's whole life or ruin it. . . not to mention that the tumor threatens Hector's mortality entirely.
It's odd to find yourself admiring the character of an animate tumor. But Jack is a wonderful voice and has such charisma you can't help but like him. The humor in this book is ongoing and often of the bawdy sort. Much of Hector's ruminations are on snogging (British term for kissing), bosoms, bodily humor, and the gross things that teenage boys find endlessly appealing, yet it's done with such flair and aplomb that Hector's adolescence seems somehow sophisictaed. Maybe it's the British thing. Speaking of, some readers might be thrown by the British slang---"taking the piss" means making fun of someone, not anything relating to the bathroom, for instance--but many more will suddenly find words like "gormless" peppering their vocabulary.
Jack Tumor was great fun. Funny and satisfying.
Posted by Karen Labels: British lit, humor, Karen