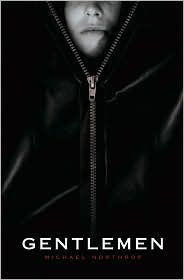 What a great cover! Is that kid in a hoodie or a body bag? This sort of dark uncertainty--what is really happening?--is at the heart of Gentlemen by Michael Northrop.
The novel's main characters are four high school guys who make up a tight-knit, loyal band of friends. These guys are the bad grade makers, the delinquents, the trouble makers, but one thing they have down pat is loyalty to the group. When Tommy, one the four, hurls his desk over in class rather than answer the teacher's question, his other three friends assume he has been expelled. How else to explain his sudden disappearance? But when his mother hasn't heard from him and no one has seen him in days, the guys wonder if Tommy has run away again. Around the same time, their weird English teacher--a guy who snidely insists on calling the guys "gentlemen"-- brings a big blue barrel into class, inviting the students to guess what might or might not be stuffed inside. It's supposed to be a visual aid tied into their Crime and Punishment reading assignment, but when the three friends are forced to help the teacher move the barrel to his car, they become aware that the mystery item inside is as heavy as a body. The thing is unwieldy, strangely joint-like and wrapped up in a blanket. Only later does the horrible idea come to them: Could it actually have been a body they helped move? Could it actually have been. . . Tommy?
With an authentic voice, fifteen-year-old Micheal (his parents misspelled his own name) narrates this story of crime and punishment, guilt and suspicion. Thrown in for good measure, questions of loyalty and how far a person should go for friendship. At what point do the bonds of friendship constrict too tightly? What do you do when you suspect something awful has happened to your friend and especially what do you do if you've been implicated in the potential crime? No one is going to believe the ramblings of a bunch of juvenile delinquents, after all. So, how to get to the truth?
Great tension, eerie premise. What really happened to Tommy? Suspenseful and creepy, this novel keeps the reader guessing until its chilling ending.
Posted by Karen Labels: dark fiction, Karen, suspense