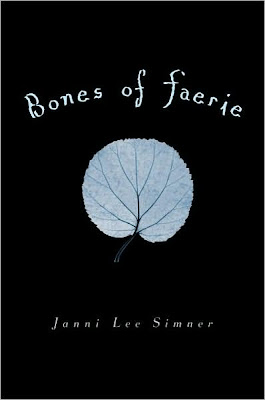 Post-apocalyptic fiction is all the rage these days. It’s always been a favorite genre for me. I wasn’t expecting Bones of Faerie to fit into this category but strangely it does. The world in this book is no longer the one we know now. Modern civilization was destroyed in the War with Faerie and though some human survivors remember the time Before, most of the world has reverted to a pre-industrial revolution way of life. It turns out that though most humans weren’t aware of it, magic was and is real, the world of Faerie was real too, and when,it’s implied, humans destroyed too much of the Earth, Faerie had enough and let us have it. Using magic, they turned plants and trees into sentient attackers. Loads of humans died; loads of faeries died. Now the remaining humans fear magic. Any humans born with a hint of magic about them are put to death. When Liza’s infant sister is born with telltale magic signs, her father leaves her on a hillside to perish. Too late Liza goes to try to save her sister and finds only the remains wild animals have left behind. Her mother abandons the family in grief. Shortly thereafter, Liza starts suffering magical visions and flees as well. She’s followed by Matthew, a friend and potential love interest, and together they discover a nearby community where the populace has embraced and honed their magical abilities, not feared and destroyed them. Following her visions, Liza realizes there is a chance her mother might have survived and she goes on a quest to find her mother.

I read this book because it’s been nominated for our Mock Printz discussion. I can’t say I think it’s going to win the Printz, but it was a worthwhile read and a fast one. I liked the unusual world the author created, especially the sentient plants. I found the mix of post-apocalypse and fantasy a little uneasy, not as fluid as Carrie Ryan’s The Forest of Hands and Teeth, as though I were always on the verge of not being able to suspend my disbelief, but in the end I accepted it. Some of the bit players weren’t as well developed as other. Allie, a young healer, seems like a pretty stock character. Matthew seems not to have any personality at all—sure he can shape-shift into a wolf, but even his magical ability seems not to match the magic of the rest of the fictional world; he seems to exist mostly to make Liza’s journey easier and secondarily because teen readers like their love interests. On the other hand, the faerie characters are intriguing and Liza is interesting enough to carry the action. The plot holds the reader’s attention and the stakes are high—failing in the quest means death for all three of our main characters. Success means a better future for the world at large.

Some lingering questions remain. For instance it isn’t clear why humans have magic. Did they interbreed with faeries at some point? Have they always repressed their magical abilities? Why would Liza’s mother, who once cavorted in a faerie land, go to the abusive man who became her husband? Well, perhaps these are queries for the reader to answer in her own mind or perhaps the author plans a sequel. I'd be willing to read that. According to the jacket, this is Janni Lee Simner's first novel for teens.
Posted by Karen Labels: Apocalyptic novel, faeries, Karen