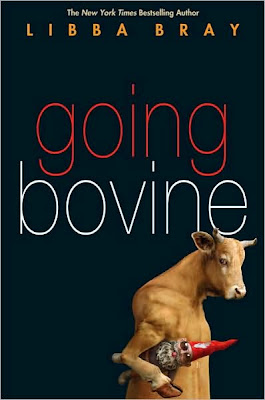 Who knew mad cow disease could be so hilarious? Going Bovine by Libba Bray is one of the funnier and more satisfying books I've read this year. First off, great cover. That's always a plus in my shallow book. Second off, what an adventure, one that might be taking place only in the main character's mind but that's not for certain. Basically nothing is for certain in this book.

Sixteen-year-old Cameron finds out he has mad cow disease before he's even lived enough of his life to lose his virginity. There's no cure. His brain is slowly falling apart and as a result he's suffering hallucinations. While in the hospital, Cameron is visited by Dulcie, a pink-haired, punk rock angel, who sends him on a quest to save the world. Is she simply a product of his fevered mind? Who can take the chance when a black hole threatens to swallow the world, fire giants are on the loose, and finding the mysterious Dr. X who has set this all in motion might mean finding the only cure for your fatal disease? Cameron heeds the call and escapes from the hospital along with his classmate, Gonzo, and joined by an enchanted yard gnome who's really an immortal Viking warrior. As Cameron follows the random clues he finds along the way--it's all connected, as Dulcie explains--he goes on the advenute of a lifetime--a life that will end far too soon if he fails in his task.

There's been a lot of buzz about this book and the buzz is merited. Fabulous, funny, and fun, though not without its sad side this book is good for those who like road trip fiction, humor, adventure or all three, narrated by a lovable-though-possibly-doomed teenage hero.
Posted by Karen Labels: adventure, humor, Karen, road trips
Newer Post Older Post Home