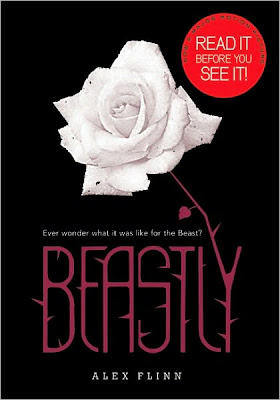 Beastly, the movie, is coming out in early March and I'm interested in seeing how faithful it will be to the book by Alex Flinn. I read the book several months back. It's an urban, modernized version of "Beauty and the Beast" from a teenage Beast's point of view.

Rich, spoiled Kyle treats people like crap. He gets his comeuppance when a witch curses him and he turns into a frightful, hairy beast. No waxing, lasering or shaving makes a dent in his appearance. This is magic, after all. And the spell can only be broken if he redeems himself by finding someone to love him for who he is not what he looks like.

There's quite a bit of willing suspension of disbelief neccesary to enjoy the book. Obviously it can't be too realistic when it's a fairy tale. Alex Flinn does a good job making it as believable as possible though. So, how will the movie fare?

Hmm, well the very first thing I noticed upon seeing publicity posters for the movie is that the beast is not covered in hair. Instead he looks like a tattooed and artistically scarred specimen. Considering that we see people like this all the time in our society, I wonder how beastly the movie makers truly wanted to make him. Beastly but still hot underneath? Perhaps. I'm a little unsure how I will like the movie, but I'm giving it a go. Neil Patrick Harris is in it, and that might just be good enough for me.

I suggest reading the book first. Then you too can have the fun of comparing and contrasting the stories.
Posted by Karen Labels: books to movies, fairy tales, Karen