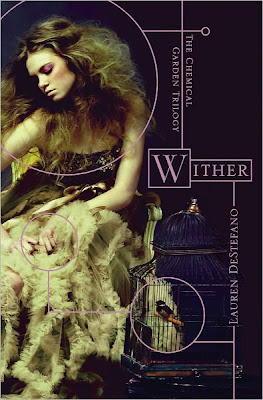 I'm excited about this new series. When I first saw the book the premise grabbed me but the cover made me think, "Is this gonna be too fluffy for me?" Happily, no. I'm really enjoying this one. (My apologies to those who like fluffy.)

In the far future America of Wither, people die young. Very young. Males live to age 25, females to age 20. (Sexism! Why do guys get five more years?) Anyway. . . the world isn't doing so well: kids crowd the orphanages since their parents are dropping like flies, and the scientists of the older generation, the last to live a normal lifespan, fight for a cure that they can't find and some people don't want. Rhine's parents, who were geneticists, were killed because of their research, leaving Rhine and her twin brother, Rowan, to fend for themselves. Now teenagers, their greatest threat isn't scavenegers, the poisonous streets, or the dwindling job opportunities, but Gatherers--the men who kidnap young women and force them into sham marriages for the wealthy. (Here the premise gets a little fuzzy for me. I'm not entirely sure why all these women have to be kidnapped or why it's allowed, but I'm going to accept it anyway. Let's chalk it up to the general disintegration of society as we know it) The lucky kidnap victims are chosen for forced marriages, the unlucky are abandoned in brothels or murdered.

When the book opens, it's already too late for Rhine. We find her stuffed in a van with dozens of other terrified young women. Luckily, she is one of three chosen to become a bride; all of the other girls in the van are shot to death. Rhine and her "siser wives" find themselves prisoners in a luxurious mansion, married off to Linden, a young man who treats them well but holds them prisoner nonetheless. Rhine despises her captors and focuses her energy on pretending to be docile while actually searching for escape. She desperately wants to find her twin again. The mansion, though, is locked down tight, maze-like, its security nearly impossible to breach. As the weeks pass, Rhine develops a fondness for her sister wives and for the servant, Gabriel, and even, grudgingly, for Linden. But Linden's father, a cold and calculating scientist, turns Rhine's blood to ice. He's the biggest obstacle in her path to escape. But Rhine is determined to get out, find her brother, and live the last years of her life in freedom.

This is a gripping story, told in a fluid writing style that keeps the pages turning. I like the world the author created and the ideas she raises---can a prison ever become a comfort or is it always a prison no matter how beautiful it may be? How is loyalty formed, tested, and broken? Who's the villain in this story, really? What would you do if you only had four years to live--and you were expected to live them as a prisoner?

I haven't finished yet, but I can't imagine the book's going to disappoint me in the end. I wouldn't be surprised by a cliffhanger ending though. This is the first in The Chemical Garden trilogy.
Posted by Karen Labels: Apocalyptic novel, Karen, Kidnapping