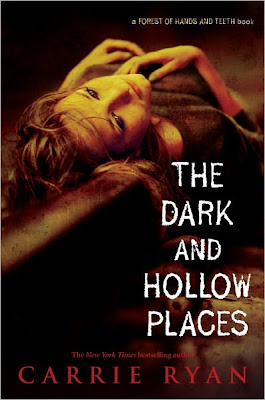 In March the third and final (?) book in The Forest of Hands & Teeth trilogy came out. I finally carved out the time read it, and I’m glad I did. I believe this is the strongest book in the series, probably because the narrator is the strongest in the series. Also, this book was action, action, action. Zombie action, which is, of course, the best kind. Yet the author still finds time to bring a love triangle into the mix, and this time she outdid herself—not only is there a love triangle, there is a double love triangle. Kudos on that, Carrie Ryan.

As usual, the narrator engages in a lot of inner, angsty thought, but Annah’s main concern is survival. As the Dark City (which I finally found out for sure was New York City) implodes beneath the barrage of a zombie horde (you don’t want to encounter one), survival becomes more and more impossible. Annah, terribly scarred from a fall into a nest of barbed wire, rises to the challenge. She is determined to live, especially when she finds her long lost twin sister (not as cheesy as it sounds) and her childhood friend/love, who, unfortunately, has the hots for the non-scarred twin. Fear not, though! Remember infected-but-immune Catcher from Book Two? Well, even if you don’t remember him, it doesn’t matter; the author gets you up to speed. He is available and hot (literally as well as figuratively, due to the infection in his blood) and despite herself, Annah is drawn to him. But curse it all, if he isn’t still carrying a torch for Gabry, a.k.a Annah’s twin, a.k.a., the much less-compelling narrator of Book Two. Can’t a scrappy, scarred survivor girl catch a break? No, she cannot because not only is she running from a zombie horde, but now she’s got an even scarier human nemesis to face. Scarier because humans, unlike zombies, are capable of calculated, cold-blooded thought. And these humans have lots of firepower available to them.The Recruiters, who used to be a kind of army fighting the zombies, have become corrupt thugs who care only for their own interests and bully the ever-dwindling human population. They want Catcher because his immunity is valuable and they've figured out the best way to control Catcher is by controlling the people he cares about, one of whom is Annah. Either Annah will kick survivor mode into high gear or she won’t survive at all.

A satisfying end to a series, full of action and conflict, narrated by a strong female character. You can read this without reading the first two books if you want to, though some things won't be as interesting. I enjoyed the first two books too, but they both indulged in a more than a bit of plodding pace. I didn't find that to be the case with Book Three. Not every question the series raised for me was answered, but I finished feeling like I'd gotten a satisfying end and a good story.
Posted by Karen Labels: Karen, zombies