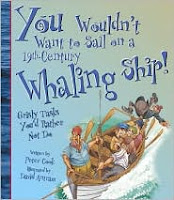 Earlier this year I was researching for a tween history program I run at the library, You Wouldn't Want to... (Be an Aztec Sacrifice, Be a Roman Gladiator, Be an Egyptian Mummy, etc). These programs are more or less based off a series of comic book histories by the same names. I always try to do a little outside reading on the topic, so that I can make sure the facts I have are accurate, and that the author didn't leave anything really fun out. Anyway, that month it was You Wouldn't Want to Sail on a 19th Century Whaling Ship. This was a particularly interesting one, and I was really excited over the program because I had already read another book on the story, and it was a really, really good story... The program turned out great, but this blog isn't about You Wouldn't Want to Sail on a 19th Century Whaling Ship. 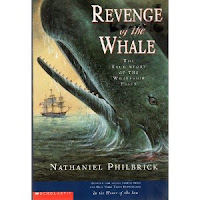 It is about the story, it was such a good story (a true one at that), that I read a few books on it from cover to cover. This is unusual for me, usually I will just skim through my back up research to verify a few things and read any little bits that catch my eye. Not this time. I started by re-reading The Revenge of the Whale by Nathaniel Philbrick. Okay, I'm a history person, so I am going to be a little more likely to get sucked into this sort of story than some, but still it is pretty rare that I will re-read an entire nonfiction book. But I did. Picked the thing up, and started reading. This story of the Whale Ship Essex is the stuff movies are made of (I wonder if they ever will?). Herman Melville knew the story, and he was so inspired by it that he wrote a little book called Moby Dick. If you ask me though, Moby Dick, is sort of a snore in comparison to the true story (I will probably be booted out of the literary community for that, I was already on thin ice). But seriously, the crew of the Essex experienced adventure enough, there was no need to add fiction! Ship wrecks, whale hunts, a rampaging sperm whale that demolishes their ship, a deserted desert island, being adrift at sea in the middle of no where, and.... pious well behaved Quakers turned cannibals. I kid you not. How can you top that?

Turns out you can top it by reading another book by Nathaniel Philbrick. Because there is an adult version of Revenge of the Whale, and the adult version won the National Book Award. I don't know how I'd missed it, it came out before I was a librarian and sometimes I have Youth tunnel vision, but I still can't believe I hadn't read it. My Branch Manager mentioned the book to me, I checked it out, and ended up reading that one cover to cover too. In the Heart of the Sea tells the same story and uses the same research (I guess Nathaniel Philbrick decided to kill 2 birds with one stone) but it includes all of the gruesome details! If you are going to read a harrowing survival story... well you might just as well get the details. Don't get me wrong, this book is sad, sad in a way that a fictional book never could be. These were real men, who were really suffering, even the fact that the whales they hunted were real makes it sadder. It also makes it more gripping and in my opinion, an all around better story.

So try one. If you want gruesome details, try In the Heart of the Sea, it is in the adult NF area at 910.9164 P545i. If you want the harrowing story, but don't want to get sick to your stomach, try The Revenge of the Whale, in youth NF at 910.9164 P545r. Please be advised, even the kids version talks about cannibalism... and whaling (both of which are pretty gross).
Posted by Emily Labels: Emily