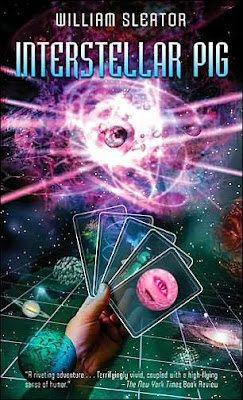 Kristin informed me this morning that YA author,William Sleator, died. Sadness! William Sleator wrote some of the first YA science fiction novels I have ever read--and I remember them, in detail, to this day. House of Stairs, Into the Dream, Interstellar Pig, Singularity. . . these were just a few of his novels I devoured. I was speaking to one of my co-workers about WS tonight and she was foggy on the details of Interstellar Pig. I immediately piped up, reconting the twist ending and the chilling details of the alien abilities created in those pages. And I would tell them to you now except I'd hate to ruin IP for anyone who hasn't yet discovered it. Basic plot premise: Teenage Barney is spending a boring summer at a beach house with his parents. Things get more interesting when the exotic, college-age neighbors next door show up and introduce Barney to the elaborte and addictive game they play called, none other than, Interstellar Pig. Each player chooses an alien race card and plays viciously against the other players with the objective of winning a piece in the game called The Piggy---at any price. Soon Barney begins to realize the college kids have a fixation with his beach house; they're trying to get in, and Barney's unease grows the longer he plays their strange game and the more aggressive the older kids become in their endeavors to get into his house. Intertstellar Pig is just a game. . . or is it?


Truth be told, I haven't been as taken with William Sleator's more recent books. The Boy Who Couldn't Die was okay but not my favorite although it is full of the trademark chilling William Sleator touches. That's one of the things I like so much about his books--the stakes are high. Very high. And the reader is never quite assured that things will end well. In fact, they don't always end well. I recommend starting your William Sleator reading feast with Interstellar Pig, then following it with the sequel, Parasite Pig. For your third course, try House of Stairs in which a group of teenagers finds themselves imprisoned in a strange building with no doors, no windows, and only a series of rooms and stairs and flashing lights. Any food though? Maybe. Maybe not. Then finish your feast with Singularity, in which twin boys find a space in their backyard where time moves differently than in the rest of the world.

These books are science fiction though not overly technical. William Sleator had a knack for explaining difficult concepts easily and telling gripping stories in about 200 pages. These books are easy to read, will give you the creeps, give you a thrill, and keep you turning the pages. I'm sad there won't be any more Sleator novels. Well, readers do get one more. Sleator's last book, The Phantom Limb, is due out in October. Reading a plot synopsis from amazon, one understands why Publisher's Weekly once described Sleator as "gleefully icky." Icky but with brilliant ideas, dear readers. Icky but brilliant. RIP, William Sleator.