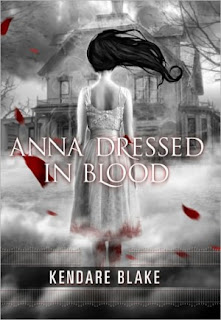 In the mood for a spooky read? Anna Dressed in Blood by Kendare Blake tells a story in the spirit of legends and ghost stories like Bloody Mary and the ghostly hitchhiker.

The ghost of sixteen-year-old Anna Korlov, who was violently murdered in 1958, is said to haunt the now abandoned house where she once lived in the town of Thunder Bay, Ontario. Local legend claims that anyone who dares venture into the house risks being torn limb from limb by Anna’s vengeful spirit.

Cas Lowood kills dead people, a skill and curse that he inherited, along with a ghost-killing sword or athame, from his father who was violently murdered by a powerful spirit. As the story opens, the reader witnesses Cas in action as he uses his athame to slay a ghostly hitchhiker that lures unsuspecting drivers to their deaths. Soon after, Cas and his mother, a practitioner of witchcraft, move to Thunder Bay to track down the ghost of Anna Dressed in Blood. Cas enrolls in the local high school and soon becomes friends with Carmel, the school socialite, in hopes of finding out more about the legend of Anna. As part of a mean-spirited prank, Cas is taken to Anna’s house after a party one night by Carmel’s ex-boyfriend Mike and his cronies. The evening takes a bloody turn for the worst when Anna appears, all decked out in a dress stained red by her eternally dripping blood, and kills Mike by ripping him in half…Yikes!

Together with help from friends Carmel and Thomas, a nerdy and likable teen intuitive, Cas attempts to discover why Anna has become such a powerful entity and how she can be stopped. However, as the secrets surrounding her tragic story begin to unfold, Cas finds that he is unprepared for the feelings that he has for Anna, and equally unprepared for the dark entity that may be stalking him.

Anna Dressed in Blood is a definite stand-out among the multitude of teen paranormal love titles available these days. It features some truly creepy moments, interesting and well-developed characters, a healthy dose of gore, and just enough romance to not repel those non-romance readers like myself.
Posted by Greg Labels: ghosts, Greg, horror, paranormal romance, Witchcraft