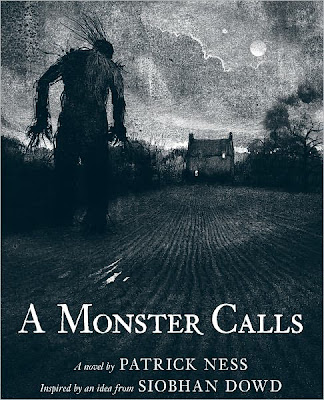 "The monster showed up just after midnight. As they do."

What better October read than a monster book. And what an unusual and satisfying monster book this one is--A Monster Calls, written by Patrick Ness based on an idea by Siobhan Dowd. Both Ness and Dowd have written highly acclaimed teen fiction. Dowd died of breast cancer before she could finish this book. Ness wrote it using Dowd's notes as a starting point, and the result is a blend of two great authors illustrated with intriuging black and white drawings by Jim Kay.

Every night, thirteen-year-old Conor has the same terrifying nightmare, a nightmare featuring a monster so horrifying that Conor can't even speak of it. So when another monster shows up in his yard, Conor isn't frightened. As long as it's not the thing from his nightmare, it can't hurt him, not really. The monster claims that Conor called him and that it's been a long time since he came "walking." Normally the monster is nothing more than a giant yew tree in the cemetery behind Conor's house. But it has taken the shape of a behemoth tree-man, complete with sharp teeth and rumbling voice that demands Conor's respect and his attention. The monster says he will tell Conor three stories and that after that Conor will tell his own story--the truth Conor refuses to face. The tree-man's stories seem straightforward but each takes a twist Conor can't understand. The monster's sense of justice doesn't follow Conor's and his frustration grows. In the meantime, Conor's daylight hours are filled with tension. His beloved mother is undergoing treatment--again--for the cancer she swears to her son she will beat. His austere grandmother has arrived, poking her nose into their business. And at school every day, Conor is tormented by bullies. He never fights back. Despite this, Conor is a boy filled with anger, and the tree-man draws it out of him as the stories are told, one by one.

Not your usual monster tale. A wonderful read, and perfect for this time of year. I wonder what Siobhan Dowd would have thought about the story, how it changed in Patrick Ness's hands. No one can say for sure, but I like to think she would have approved. I know I really liked this tale, and I recommend it, without reservation, to you.
Posted by Karen Labels: Karen, monsters