I don't usually read mysteries, but I'm glad I stepped outside my normal reading type thi 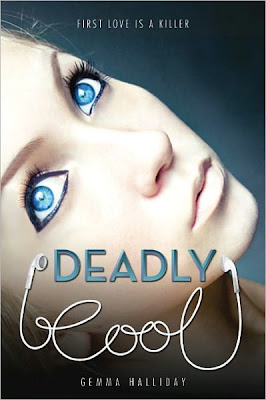 s month because I very much enjoyed
Deadly Cool, the first book in a new series. I'm actually looking forward to the second book, which is really unusual for me because I don't normally like series either. So, the author, Gemma Halliday*, must be doing something right. If I had to pick one thing about the book I liked the most it would have to be the main character's humorous voice. Even if the plot can be a bit predictable in spots (not in all spots, just in some; well, several--but really, it doesn't ruin the enjoyment of the book), the narrator keeps things fresh and fun, and I truly liked her. The second thing that got me hooked--the romance part of the plot. Obvious? Yes. But not neatly sewn up at the end, leaving the reader anxious to read the next title in the series to see how things progress. If things progress. Which they totally will.

So, what's it about? It's about how sixteen-year-old Hartley gets dragged into solving a murder mystery when really she just wants to find out if the rumor about her boyfriend, Josh, cheating on her (with the president of the Chastity Club, no less) is true. The book opens with Hartley finding a condom wrapper in her boyfriend's locker--not a good sign. When she goes over to his house to confront him, sure enough she finds the Chastity Club president in Josh's bedroom. Unfortunately, the CC president has been strangled to death. Josh is the obvious culprit, but even through her hurt and anger, Hartley knows he's being framed. While philandering Josh stays on the run from the cops, Hartley joins forces with the bad boy editor of the school paper to track down the real killer. Danger ensues. As does humor. Suspects abound. Can Hartley find the killer? I'm happy to report that yes, she does find the killer. This isn't one of those mystery series where you have to wait for the third volume to find out the solution to the mystery. (That drives me insane.) Harlety has heart, humor, and a tendency to react like a normal person would to finding dead bodies--by freaking out. She gets nervous, doesn't like heights, tries to be cool when everyone's staring at her, can't tell a lie to save her life, and takes chances, even when she's afraid.

The next book in the series is Social Suicide, due out in April. I hope I enjoy it as much as this first one.

* According to Gemma Halliday's author bio, she has worked "as a film extra, a teddy bear importer, a department store administrator, a preschool teacher, a temporary tattoo artist, and a 900-number pyschic." Amusing.
Posted by Karen Labels: humor, Karen, mystery