The Watch That Ends the Night 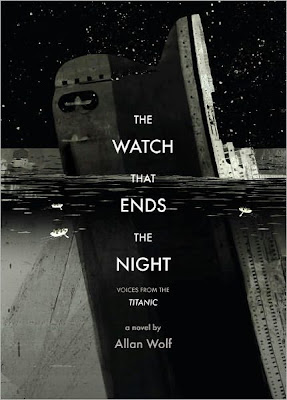 See that cover? That is a glorious cover. THAT is the Titanic about to go under. This blog post might be coming a bit early because the 100-year anniversery of the sinking of the Titanic is April 12, but I can't hold back. I'm a Titanic junkie, absolutely obsessed with the tragedy of near a century ago, and Allan Wolf has captured the humanity of the tragedy in this most excellent novel-in-verse told from Titanic victims' points of view. Some of the narrators I knew would not survive--history tells us so--but others I fretted over. Would the lesser-known characters make it or succomb to the icy waters of the Atlantic? So many characters populate this novel, from the captain to the cardshark to the immigrant girl experiencing first love to the tailor who has kidnapped his sons from his wife to the baker to the ship rats to the architect who designed Titanic, and even, in some very creepy poems, the Iceberg that took the great ship down. Really, the iceberg's pages are the eeriest. I could have lived without the rats, but even they had found a small place in my heart by the story's end.The reader knows what's coming, but no one on board can imagine that the mighty Titanic could ever sink. Which is why it was so hard (heartbreaking!) for people to leave the ship and get into the lifeboats. By the time they realized they should have done it, it was far too late. The author painstakingly researched this novel, and the end notes, explaining which parts were completely historically accurate and which were embellished in the name of good storytelling and understanding the human factor, were fascinating. Particularly tragic were the poems showing the dozens of "Marconi-grams" from ships ahead of Titanic, all ice warnings that, sadly, went pretty much ignored.

I expected this to be a potential Printz honor if not the winner, but the winners were announced Monday and this book was not among them. (The Printz winner, incidentally, was Where Things Come Back, a worthy title and one our Mock Printz group chose as an honor title.) If you're interested in the Titanic, you need to read this beautifully written book.
Posted by Karen Labels: historical fiction, Karen, novels in poetry