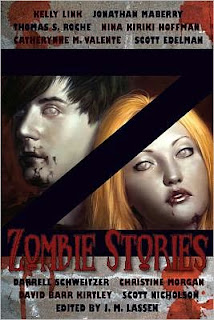 This short story compilation offers up an eclectic mix of zombilicious tales featuring teen protagonists dealing with the world of the walking dead. Although I found most of the stories to be fairly entertaining, I was a bit disappointed that none of them scored high on my personal chill-factor rating scale…On a scale of 1 to 10 (1=slightly unsettling and 10=insanely horrifying), the creepiest story, The Barrow Maid - a Viking saga done zombie-style, just barely scores a 5.
In fact, a few of the stories actually made me pity rather than fear the zombies. This is a huge pet peeve of mine when it comes to reading horror or watching scary movies…I want to be scared of the monster not feel sorry for it! In the story The Days of Flaming Motorcycles, the zombies are sad and kiss each other! What the heck!!! In The Dead Kid, a defenseless little zombie boy that bleats like a goat is kept in a pit where he is tortured and harassed by a group of mean ol’ living teen bullies. Zombies are supposed to be soulless, fear-inducing reanimated corpses with just one thing on their minds…an intense, painful need for human flesh and brains! I still remember being annoyed by the pity that I felt after watching episode 1/season 1 of the Walking Dead when Rick comes across the poor zombie lady who has been cut or bit in half and is doing her best to pull her way through the park with her frail, mangled zombie lady arms.

That said, there are two stories that I did find to be particularly disturbing. The Third Dead Body is about a teen prostitute who rises from the grave with an intense desire to find the man who murdered her. Seven Brains, Ten Minutes is a stomach-churning tale about a live teen boy who is forced to pose as a zombie in a brain-eating contest in order to save the girl of his dreams. Both stories showcase how the cruelty of living human beings can be even more horrific than zombies.
The stories in this book do feature some nice first lines. I’ll end this entry by offering my favorites…
Benny Imura couldn’t hold a job, so he took to killing. – Family Business by Jonathan Maberry

All of this happened because a boy I once knew named Miles Sperry decided to go into the resurrectionist business and dig up the grave of his girlfriend, Bethany Baldwin, who had been dead for not quite a year. – The Wrong Grave by Kelly Link
Daddy said them that eat human flesh will suffer under Hell. – You’ll Never Walk Alone by Scott Nicholson

The brain was in front of me, pink-gray and pulsing in the sun. – Seven Brains, Ten Minutes by Marie Atkins
Posted by Greg Labels: Greg, short stories, zombies