For the second 12 Days of Teen Lit post, we give you:

(some may even be pipers!) 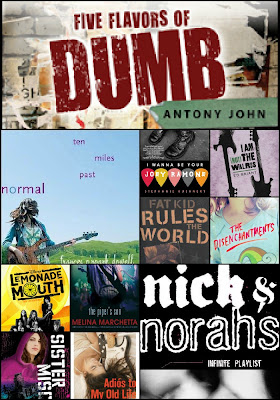 Adios to My Old Life.  As a talented singer-guitarist with a dream of going pro, Alegría Montero is getting fed up with the endless, boring parade of quinceañeras and other family party gigs. She's longing for something bigger. And Oye Mi Canto -- a new reality TV show that's searching for the next Latin superstar -- is definitely that. Ali figures she'll never make the cut, but it seems like a good way to get her overprotective father to take her seriously.

The Disenchantments. Colby's post-high school plans have long been that he and his best friend Beth would tour with her band, then spend a year in Europe, but when she announces that she will start college just after the tour, Colby struggles to understand why she changed her mind and what losing her means for his future.

Fat Kid Rules the World.  Seventeen-year-old Troy, depressed, suicidal, and weighing nearly 300 pounds, gets a new perspective on life when a homeless teenager who is a genius on guitar wants Troy to be the drummer in his rock band.

The Five Flavors of Dumb.  Eighteen-year-old Piper becomes the manager for her classmates' popular rock band, called Dumb, giving her the chance to prove her capabilities to her parents and others, if only she can get the band members to get along.

I Am (Not) The Walrus.  As the singer and bass player for a Beatles cover band, Toby embarks on a quest to increase his sex appeal, a plan that derails when he finds a mysterious note inside his old bass guitar.

I Wanna Be Your Joey Ramone.  Punk rock is in Emily Black's blood. Her mother, Louisa, hit the road to follow the incendiary music scene when Emily was four months old and never came back. Now Emily's all grown up with a punk band of her own. Determined to find the tune that will bring her mother home. Because if Louisa really is following the music, shouldn't it lead her right back to Emily?

Lemonade Mouth. A disparate group of high school students thrown together in detention form a band to play at a school talent show and end up competing with a wildly popular local rock band.

Nick and Norah's Infinite Playlist.  High school student Nick O'Leary, member of a rock band, meets college-bound Norah Silverberg and asks her to be his girlfriend for five minutes in order to avoid his ex-sweetheart.

The Piper's Son.  After his favorite uncle's violent death, Tom Mackee watches his family implode, quits school, and turns his back on music and everyone who matters, and while he is in no shape to mend what is broken, he fears  that no one else is, either.