In celebration of the Holiday Season, we proudly bring you the 12 Days of YA Lit! 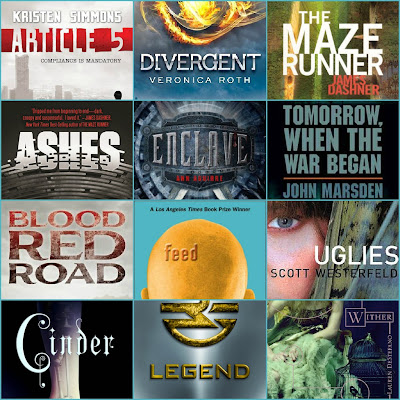 Article 5 by Kristen Simmons.   Seventeen-year-old Ember Miller has perfected the art of keeping a low profile in a future society in which Moral Statutes have replaced the Bill of Rights and offenses carry stiff penalties, but when Chase, the only boy she has ever loved, arrests her rebellious mother, Ember must take action.

Ashes by Ilsa J. Bick.  Alex, a resourceful seventeen-year-old running from her incurable brain tumor, Tom, who has left the war in Afghanistan, and Ellie, an angry eight-year-old, join forces after an electromagnetic pulse sweeps through the sky and kills most of the world's population, turning some of those who remain into zombies and giving the others superhuman senses.

Blood Red Road by Moira Young. In a distant future, eighteen-year-old Lugh is kidnapped, and while his twin sister Saba and nine-year-old Emmi are trailing him across bleak Sandsea they are captured, too, and taken to brutal Hopetown, where Saba is forced to be a cage fighter until new friends help plan an escape.

Divergent by Veronica Roth.  In a future Chicago, sixteen-year-old Beatrice Prior must choose among five predetermined factions to define her identity for the rest of her life, a decision made more difficult when she discovers that she is an anomaly who does not fit into any one group, and that the society she lives in is not perfect after all.

Enclave by Ann Aguirre. In a post-apocalyptic future, Deuce, a loyal Huntress, brings back meat while avoiding theFreaks outside her enclave, but when she is partnered with the outsider, Fade, she begins to see that the ways of the elders may be wrong.

Feed by M.T. Anderson.   In a  society dominated by the feed, a next-generation Internet/television hybrid that is directly hardwired into the brain. Teen narrator Titus never questions his world, in which parents select their babies' attributes in the conceptionarium, corporations dominate the information stream, and kids learn to employ the feed more efficiently in School. But everything changes when he and his pals travel to the moon for spring break.

Legend by Marie Lu. In a dark future, when North America has split into two warring nations, fifteen-year-olds Day, a famous criminal, and prodigy June, the brilliant soldier hired to capture him, discover that they have a common enemy.

The Maze Runner by James Dashner.  Sixteen-year-old Thomas wakes up with no memory in the middle of a maze and realizes he must work with the community in which he finds himself if he is to escape.

Tomorrow, When the War Began by John Marsden.  While Ellie and her friends are away in the bush, the world changes. Suddenly they are inthe toughest situations humans can confront, facing life and death decisions. They are thrown into a world where they find courage, initiative, spirit and wisdom ... or they die.

Uglies by Scott Westerfeld.  Tally is about to turn sixteen, and she can't wait. Not for her license -- for turning pretty. In Tally's world, your sixteenth birthday brings an operation that turns you from a repellent ugly into a stunningly attractive pretty and catapults you into a high-tech paradise where your only job is to have a really great time. In just a few weeks Tally will be there. But Tally's new friend Shay isn't sure she wants to be pretty. She'd rather risk life on the outside. When Shay runs away, Tally learns about a whole new side of the pretty world -- and it isn't very pretty. The authorities offer Tally the worst choice she can imagine: find her friend and turn her in, or never turn pretty at all. The choice Tally makes changes her world forever.

Wither by Lauren DeStefano.  After modern science turns every human into a genetic time bomb with men dying at age twenty-five and women dying at age twenty, girls are kidnapped and married off in order to repopulate the world.
Posted by Merideth Labels: 12 Days of Teen Lit, dystopia, lists