Kearsten's Book Club: Across the Universe by Beth Revis 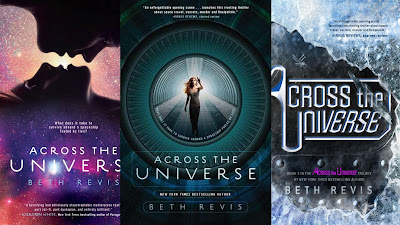 Teenaged Amy, a cryogenically frozen passenger on the spaceship Godspeed, wakes up to discover that someone may have tried to murder her.

Last week was yet another book club meeting (you missed it?!). This time, our book of choice was Beth Revis' Across the Universe, which we very loudly discussed for a good hour and a half.

Our discussion leader, Zach, started us off with a tour of the awesome Godspeed schematics on the official Across the Universe website (it's very cool).  And then we started talking "Across the Universe"... And what, you ask, did we talk about?

We had a great discussion inspired by this tense science fiction book about big ideas and we think you might enjoy it, too. Already read it? Try one of these book-clubber-suggested titles!

Matched by Ally Condie - In the society, officials decide who you love, where you work and when you die. Cassia has always trusted their choices. It's hardly any price to pay for a long life, the perfect job, the ideal mate. So when her best friend appears on the Matching screen. Cassia knows with complete certainty that he is the one, until she sees another face flash for an instant before the screen fades to black. Now Cassia is faced with impossible choices, between Xander and Ky, between the only life she's known and a path no one else has ever dared follow, between perfection and passion.

Rash by Pete Hautman - In a future society that has decided it would "rather be safe than free," sixteen-year-old Bo's anger control problems land him in a tundra jail where he survives with the help of his running skills and an artificial intelligence program named Bork.

Delirium by Lauren Oliver - Lena looks forward to receiving the government-mandated cure that prevents the delirium of love and leads to a safe, predictable, and happy life, until ninety-five days before her eighteenth birthday and her treatment, she falls in love. (Note: Kearsten's Book Club also discussed Delirium - read about that discussion here!)

Brave New World by Aldus Huxley - Huxley's terrifying vision of a controlled and emotionless future "Utopian" society is truly startling in its prediction of modern scientific and cultural phenomena, including test-tube babies and rampant drug abuse.