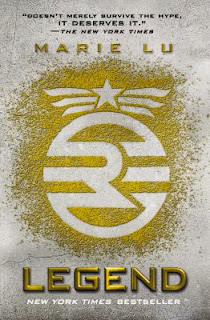 Last Monday night, book clubbers talked about dystopias and rebellion as we discussed Marie Lu's Legend, in which two teens caught on opposite sides of a totalitarian government become allies in a post-apocalyptic L.A.


Most of our discussion focused on rebellion and our two main characters: Day, a fifteen-year-old boy considered public enemy #1 in the government's eyes; and June, a fifteen-year-old prodigy, speeding her way through university and training to become the youngest military officer ever. Both of these characters are rebels in their own ways, and it was fun to debate about exactly which character was the bigger rebel.


Several of us agreed that Day was definitely a 'Robin Hood' type character, and several others shared that Day reminded them of Jace, from Cassandra Clare's Mortal Instruments series. A nearly collective sigh may have been heard at that point...


We also talked a bit about the appeal of dystopias - why are they so popular? (Not that we're complaining) We talked about distrust of government, worries about money, and even about social 'classes.' Interestingly, today Kearsten read an NPR.org article posing this same question - "What Terrifies Teens In Today's Young Adult Novels? The Economy" - which, in addition to taking a look at teen economic fears, offers up many other awesome-sounding teen dystopias. Do you agree with the journalists' theory?


Already read Legend? Why not try some of these book-club-suggested, sci-fi titles?

1984 by George Orwell. Portrays a terrifying vision of life in the future when a totalitarian government, considered a "Negative Utopia," watches over all citizens and directs all activities, becoming more powerful as time goes by.

Divergent by Veronica Roth. In a future Chicago, sixteen-year-old Beatrice Prior must choose among five predetermined factions to define her identity for the rest of her life, a decision made more difficult when she discovers that she is an anomoly who does not fit into any one group, and that the society she lives in is not perfect after all

The Hunger Games by Suzanne Collins. Sixteen-year-old Katniss Everdeen accidentally becomes a contender in the annual Hunger Games, a grave competition hosted by the Capitol where young boys and girls are pitted against one another in a televised fight to the death.