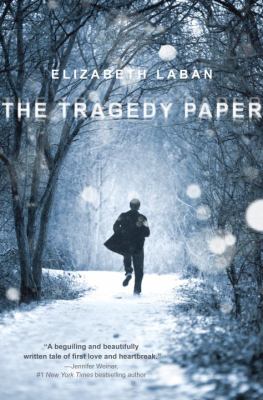 What is it about the boarding school setting that lures me into a book?  Did I secretly want to go to a boarding school? Is it the allure of a smart uniform?  Well, the kids in The Tragedy Paper  miss out in this respect because they don't wear uniforms. They do, however, get the benefit of living away from home, getting a good education, and taking part in the school's storied traditions, such as the Senior Game and the writing of the much dreaded senior Tragedy Paper, which is the loose structure for the book's two narrators and their two intertwined stories.

For Tim (one of our two narrators--ahem, the more interesting one) all of the Irving School traditions are foreign. He leaves home to attend Irving for his senior year.  Tim, a loner, due mostly to his own self-consciousness over his condition--he's an albino and people stare--doesn't have super high hopes for Irving, but when he meets a girl named Vanessa on the plane ride out, everything changes. Their plane is grounded due to poor weather in Chicago and the two strangers end up spending the night together in the only hotel room left in the airport vicinity.  No "funny business" happens that night, but both of them find an almost magical connection to the other. That connection seems decidedly over when they finally reach Irving and Vanessa returns to her boyfriend, the most popular boy in the senior class, a.k.a., a brutish lout. For reasons not entirely explained but that the reader accepts anyway, Vanessa can't bring herself to leave Brutish Lout. (I actually wish the author had expanded on this because I think it was interesting territory that would have brought more to the read--what girl hasn't at one point or another stayed too long in a bad relationship? )  But the connection isn't over, as it turns out. Vanessa plays a kind of game with Tim, wherein she sends him coded messages to meet her. Their connection remains, but Vanessa's tie to the Lout, and Tim's self-consciousness, make the connection more difficult than it needs to be.  The Lout, aware of the night Tim spent with his girlfriend, takes every opportunity to make Tim feel small, even as Tim is included in the Lout's social sphere, and most importantly, in the planning of the Senior Game. This is a nice, subtle touch--the Lout could have just been your typical jock bully. He is a jock bully, but he manipulates Tim not by intimidation but by feigned "friendship." It's clear that Tim and Vanessa have way more in common with each other than she and the Lout, but neither she nor Tim can break through their own flaws to find a way to be together. And all the while, the Senior Game looms closer, an event at which something terrible is going to happen. The reader knows this from the beginning.

Why does the reader know this? Because of the second plot of the story. Enter the second narrator, Duncan. We know Duncan is haunted by some awful something that happened at the Senior Game from the previous year. Duncan's a senior and when he enters his dorm room, he finds the CDs left behind by Tim, who lived in the room the year prior. Duncan remembers last year's Senior Game well since he was one of the only juniors allowed to attend--and Duncan saw that Awful Something, which he alludes to many times as the plot of the book unwinds. As Duncan listens to the CDs, he learns the story of Tim and Vanessa and relives the events leading up to the doomed Senior Game. The further into the story Duncan gets, the more troubled his mind, and his romantic relationship with his girlfriend, Daisy, become. The reader gets two stories, the main one being the albino Tim's and the second one being Duncan's. Both are connected, but Tim's is truly the more interesting--and tragic--of the tales.

I liked this book and read it in preparation for the upcoming Mock Printz discussions, in which librarians from across the Valley try to predict the 2014 Printz Award, which goes to the best literary fiction published for teens in the previous year.  While The Tragedy Paper won't be getting my top vote, I did enjoy it.  I found myself drawn into the tale, and though I had a pretty accurate idea of what the Awful Something was (I was right!) I wanted to keep reading. The strengths of this book were Tim's voice, his unusual condition, his own self-sabotage, and his feelings for Vanessa. The weaknesses were that Duncan seemed less wholly a person than he should have been, and--and I know this is going to sound odd--everyone at Irving was just a tad too wholesome and nice. I wanted the author to push the boundaries a bit more. I wanted the teens to stop talking like someone's adult parent. I wanted some of the plot threads to dig a bit deeper. Also, after the big reveal (the tragedy of Tim's Senior Game) I wanted a little more follow up. I think this is an author to watch, but I hope in her next book, she digs a little deeper and pushes her characters a little farther. That said, I flew through this book pretty quickly, and that doesn't happen with a book that doesn't have some meat to it. So. . . maybe I craved a little more meat (metaphorically since I am a vegetarian, which I bet everybody was dying to know) but I would recommend this read, especially to those who like a boarding school setting and a love triangle plot.
Posted by Karen Labels: Boarding School, Karen, Real life fiction, romance