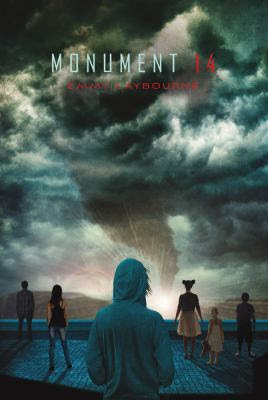 This past Monday night, we rowdy book clubbers discussed the creepy and awesome apocalyptic thriller, Monument 14 by Emmy Laybourne.

Trapped inside a chain superstore by an apocalyptic sequence of natural and human disasters, six high school kids from various popular and unpopular social groups struggle for survival while protecting a group of younger children.

The discussion was, as usual, all over the place.  We spent a lot of time on the disasters - deadly hail, bus crashes, earthquakes, and toxic smoke - and how we might (or, in Kearsten's case, might not) have survived.  We also talked about the unsettling interactions with adults in the story, and how the teens handled themselves and the younger children.

Kearsten's favorite part of the meeting was when we examined the ways in which the teen characters reacted to their situations.  Some distanced themselves, whether on purpose by hiding from the others or unintentionally by going into shock, while others tried to ignore the situation by drinking or using drugs.  Most of us were pretty disgusted by the characters who used drugs and alcohol, primarily because it meant they were leaving the younger children without support when they needed it most.

The teens in book club are awesome.

Here's a pic of some of the questions submitted by book clubbers! 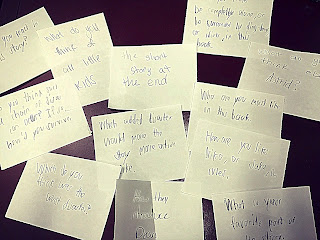 Already read Monument 14?  Then try one of these teen-endorsed read-alikes, which also focus on themes of missing parents, disasters, and survival!

Gone by Michael Grant. In a small town on the coast of California, everyone over the age of fourteen suddenly disappears, setting up a battle between the remaining town residents and the students from a local private school, as well as those who have "The Power" and are able to perform supernatural feats and those who do not.

The Enemy by Charlie Higson. After a disease turns everyone over sixteen into brainless, decomposing, flesh-eating creatures, a group of teenagers leave their shelter and set out of a harrowing journey across London to the safe haven of Buckingham Palace.

The Maze Runner by James Dashner. Sixteen-year-old Thomas wakes up with no memory in the middle of a maze and realizes he must work with the community in which he finds himself if he is to escape.

No Safety in Numbers by Dayna Lorentz. Teens Shay, Marco, Lexi, and Ryan, quarantined in a shopping mall when a biological bomb goes off in an air duct, learn that in an emergency people change, and not always for the better, as many become sick and supplies run low.