Last month's book discussion was a bit more difficult than they've been in the past, as most members of our book club had a pretty severe reaction to May's selection: Incarceron by Catherine Fisher. 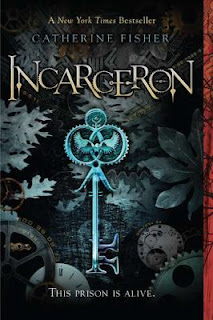 To free herself from an upcoming arranged marriage, Claudia, the daughter of the Warden of Incarceron, a futuristic prison with a mind of its own, decides to help a young prisoner escape.

Our discussion ranged narrowly between those of us who enjoyed the book and those who couldn't "get into it." Some of the readers' frustrations were with the alternating chapters between Claudia, the daughter of Incarceron's Warden, and Finn, the young prisoner Claudia decides to try to rescue from the prison. According to a couple of our teens, just as you'd start to get into one story, you were jerked out and placed into the other story - and Finn and Claudia's worlds are VERY different. Finn lives a brutal survival-at-all-costs life, while Claudia's life is quietly full of gowns, balls, and extremely well-mannered ladies and gentlemen.

Another frustration was with the setting - many readers gave up too early to learn that Claudia and Finn's world is set sometime in a future, futuristic enough to allow the people to create a prison that can think for itself, BUT that the people outside of the prison have decided that Victorian times were the "best," and therefore all activities, meals, clothing, etc. must reflect that time. Those of us who read and enjoyed the book were also frustrated, because we felt that the choice of the Victorian Era made it VERY easy for those in power to control its people via the strict class (poor servants, and rich "nobility") structure. But alas, we were not able to explore that much...

(Side note: we've agreed to reserve our graphic novel selections for discussion during May, a.k.a. "finals month")

Sadly, May's discussion was a bit like pulling teeth AND herding cats, as it's hard to focus a room full of teens to discuss a book very few of them finished, but we did come up with a list of books that also tackle over-powerful governments, steampunk/robotic elements, and/or scary, seemingly sentient prisons. These all come teen-book-clubber recommended! 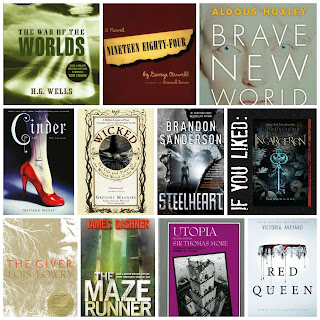 1984 by George Orwell. Portrays a terrifying vision of life in the future when a totalitarian government, considered a "Negative Utopia," watches over all citizens and directs all activities, becoming more powerful as time goes by.

The Giver by Lois Lowry. At the ceremony of Twelve, the community's twelve-year-olds accept their predetermined Life Assignments. Jonas is chosen for something special.Gradually he learns that power lies in feelings. Then his own power is put to the test -- he may not be ready and he may not be able to save someone he loves.


The Maze Runner by James Dashner. Sixteen-year-old Thomas wakes up with no memory in the middle of a maze and realizes he must work with the community in which he finds himself if he is to escape.

Red Queen by Victoria Aveyard. In a world divided by blood--those with common, Red blood serve the Silver-blooded elite, who are gifted with superhuman abilities--seventeen-year-old Mare, a Red, discovers she has an ability of her own. To cover up this impossibility, the king forces her to play the role of a lost Silver princess and betroths her to one of his own sons. But Mare risks everything and uses her new position to help the Scarlet Guard --a growing Red rebellion--even as her heart tugs her in an impossible direction.


Steelheart by Brandon Sanderson. At age eight, David watched as his father was killed by an Epic, a human with superhuman powers, and now, ten years later, he joins the Reckoners--the only people who are trying to kill the Epics and end their tyranny.

War of the Worlds by H.G. Wells. H.G. Wells' late nineteenth-century novel in which an intellectually superior race from Mars invades Earth with plans to take over the planet.

Wicked: the Life and Times of the Wicked Witch of the West by Gregory Maguire. This re-creation of the land of Oz, tells the story of Elphaba, the Wicked Witch of the West, who wasn't so wicked after all. Past the yellow brick road and into a phantasmagoric world rich with imagination and allegory, Wicked just might change the reputation of one of the most sinister characters in literature.

Great article about Kearsten's Book I really like it.
Airport Parking Heathrow