Catching up on reading...


There are times you want to have a book with you to pass the time--at the doctor's office, waiting in line at the post office, and my recent experience, on a super long plane ride. My second trip to Japan was an absolute blast (not that I'm rubbing it in your face, Greg, but I've been there twice now!). But the idea of being on a plane for so many hours is daunting. I left Phoenix at 11 a.m. on a Saturday, got to Tokyo at 3:55 p.m. on Sunday. Granted a lot of that time is time changes, but still! If a flight is long enough for four movies, it's way too long. A game system only lasts so long (DS outlasts the PSP though for battery life), so a multitude of books are in order, especially when the movies are fairly lame.

So now that I've bored you all with my details of plane travels, what did I read? Well, as previous posts have reflected, I have to read the nominated titles for YALSA's popular paperbacks committee. So I picked up The Notebook Girls, Shakeress, and Real Time. Each one a pretty good book, but definitely different from one another. 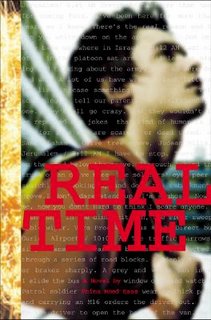 So first off, Real Time by Pnina Koss. The hardback is a terrible slightly oversized hardback. So its bulky. Who wants to carry that around? But it's out in paperback now. Much more user friendly. Written through the eyes of different people at the same time, Real time, takes the reader through a day in Israel--a day that introduces: Tomas, a 16 year old German boy arriving in Israel to live in a Jewish Kibbutz and hopes to learn if his grandfather was a Nazi soldier; Vera, a young adult who lives in the Kibbutz learning to trust in her heart after her father's betrayal and her boyfriend's suicide; Baruch Ben Tov, a Holocaust survivor and head gardener at the Kibbutz; and Sameh, the Palestinian boy who is planning a bus suicide bombing. Each character details their day up to the bombing and then those still able to continue the tragic story. With all of the suicide bombings going on in the world today, this story rings true. 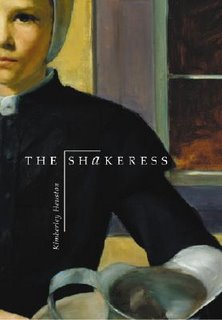 The Shakeress by Kimberely Heuston is firmly set in the past. Naomi is an orphaned teen in 19th century New England. With her siblings, she goes to the Shaker village so she can not work in the mills. The Shakers were a religious movement that has died off (I'm fairly certain) because they had no children, opting to adopt orphans into their flock. Naomi has found her God given talent, healing, so she apprentices under the woman doctor at Canterbury Village. As she grows up, she begins to yearn for things she cannot have in the Shaker community and eventually strikes out on her own to search for her true self and her way of sensing God. This title truly has a character who loves God and embraces her faith in everyday life. It was refreshing. But at the same time, Naomi begins as a Baptist, migrates out of need into a Shaker, and then ends as a Mormon. While I think there's a lot of interesting religious ponderings, and historical medical techniques in here, the ending may strike you teens as being sad or incomplete. So beware. 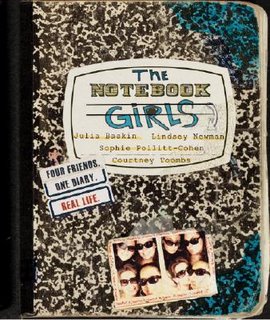 And finally, The Notebook Girls. Geez, what do I say about this book? Four teen girls in Manhatten write to one another in a notebook during their freshman and sophmore years at Stuyvesant High School, the most exclusive public school in NYC. Written in the four girl authors own handwriting, you get the inside look at the elite--parties, guys, bitchin' about school, doodles, pictures, and then some surprising eloquent entries on religion and war. In the 90s we called these "slam" notebooks. Personally, I was a little creeped out by reading it. I wouldn't want my journals from high school being read, but I can't deny the popularity of voyeurism in our country.

If you want to know if teens in New York are similar to your own life, then you'll want to check this one out.

So I survived my plane rides thanks to these three books, as well as Zookeeper on the Nintendo DS, and Sudoku. Try these books out and I don't think you'll be sorry!
Posted by Kristin Labels: historical fiction, Kristin, Real life fiction, religion

I love the idea of reading their doodles...even though the names have been changed, etc.

Yes the names were changed to protect the "innocent"!