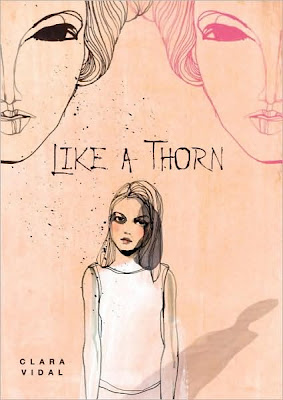 Well, that was disturbing.

I just finished Like a Thorn, a novella translated from the French, written by Clara Vidal. I can't tell you anything about the author since the entirety of the "about the author" blurb reads "Clara Vidal lives in France." Illuminating.

I do know that Clara Vidal has written an incredibly disturbing story; that's what I can tell you about the author. In this 116 page tale, we get inside the tortured mind of Melie, who begins the book as a young girl and ends the book at age fifteen. The cover depicts Meline caught between her two mothers, the Rosy Mother and the Dark Mother. There is only one physical mother but Melie always knows when her mother's mental state has shifted, when the bad mother takes over. The bad mother hates Melie. The bad mother torments Melie, never physically but emotionally. And terribly. The only recourse Melie has is in her "rituals," which the reader quickly understands is obsessive compulsive disorder. This is Melie's escape because no one, other than her cowardly father, understands the cruelty of the Dark Mother. To the rest of the world, Mother puts on a perfect face. As Melie ages, she becomes more depserate, more depressed, and she retreats further and further into her increasingly complicated rituals.

This book is painful to read but it is a fascinating psychological portrait of a child in distress. Even as Melie ages, she seems not to mature. The writing style, from Melie's point of view, remains childish to the end. This is an easy read, in one sense, and a terribly difficult one in another. It felt unpleasant to read this, and what kept me going was the need to know if Melie would escape, if any avenue would be left to her when the few people she tries to turn to let her down. Not an uplifting book by any means, but an insightful one. One that will stick with you, whether you want it to or not. But turning away from Melie's plight puts the reader in the same camp as her few confidants, the ones who fail her. Read this with a fluffy, happy book waiting in the wings. You will need it.
Posted by Karen Labels: Karen, Real life fiction, translated works