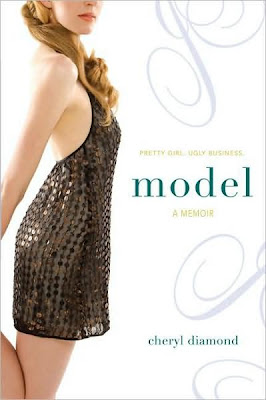 I just finished Cheryl Diamond's memoir, Model: Pretty Girl, Ugly Business, and if I'd ever had the fancy that I might want to be a model for a living that fancy would be dead now. As it turns out, I never did want to do that even if I do like to tell the people who gawk at my 5 foot 10 self, "Hey, I'm model tall!" Cheryl Diamond strips the glamour from the image of modeling and reveals its ugly side in a bright, unflattering light. Luckily she does this with a great deal of humor so Model is a treat to read.

At age fourteen, Cheryl went to New York City and tried to break into the biz. She signed with an agency but a few weeks before she was set to pound the pavement, the towers fell in New York and the agency went under. Two years later, sixteen-year-old Cheryl returned to NYC, signed with another agency, and lived all by herself in Jersey, fifteen minutes from Manhattan where she began going to casting calls, booking shoots, and making serious headway on her dreams. It amazed me that she handled herself so well. I kept having to remind myself that she was only sixteen because she sounds so much older, and she really was quite savvy about the biz. She managed to avoid living in the agency's apartment for models (a financial rip off) as well as deftly ducking several other financial traps that the agency set and that many of the other models fell prey to. But not all was smooth sailing, and she found herself homeless one harrowing weekend when she was unable to access the money her parents had wired to her before they went on vacation. (Her parents lived in North Carolina while their underage daughter cruised the streets of NYC. I couldn't decide whether I was appalled that her parents let her loose in the Big Apple or jealous that mine would never have allowed me to do the same at age sixteen.) Cheryl spent long, long days running from one end of New York City to the other, and it becomes clear from her memoir that modeling is hard, often painful work. Readers who entertain dreams of this career field should definitely read this book. Readers who don't will still enjoy it. The author's humor, both in her writing style and her attitude towards life, make this a great read. She needed that humor to survive her experience. Between catty, competing models and the often sinister and unkind attitude of her own agency, it is not surprising that many of Cheryl's competition lost themselves to drugs, nervous breakdowns, and frightening manipulation. Cheryl, herself, did not escape unscathed. A big fall was coming for her, even after she enjoyed several successes. I won't spoil the read by revealing the details here but when that part of the book came, I was distraught for the author. Her resilency and type A personality were essential to her mental and physical survival. Her humor and her writing style make this a smooth, fascinating read.

The book opens with the lines: "There are 6.5 billion people on this planet. Sixteen of them are supermodels." Consider those odds. This book isn't a morality tale for kids about the evils of the business though those evils are bluntly exposed. It is the tale of one young woman's experiences, both good and bad, and I definitely recommend the read.